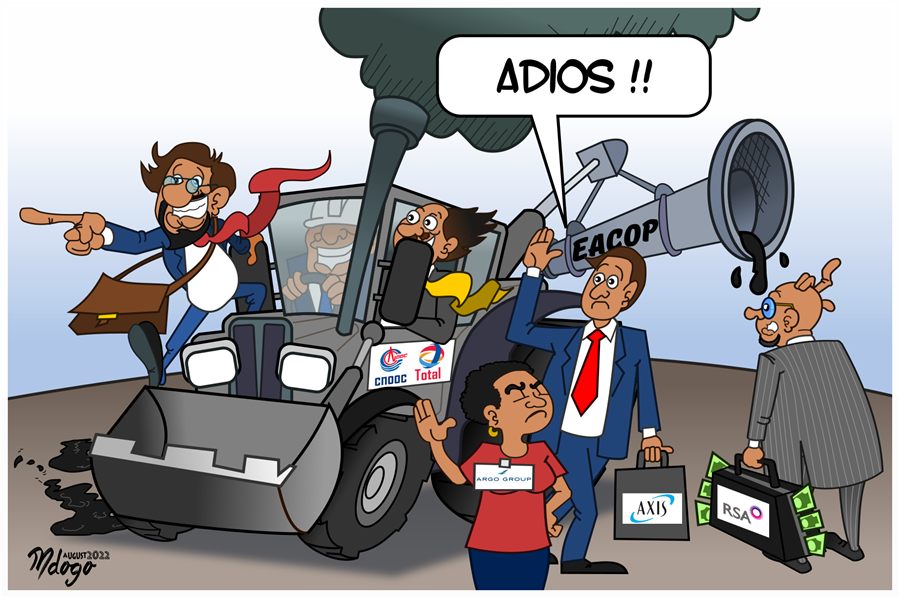 INSURANCE providers Argo Group and Axis Capital, both Lloyd’s of London members, and RSA Insurance Group Limited, a leading UK insurer, have informed the #StopEACOP coalition that they will not be involved in underwriting the East African Crude Oil Pipeline, EACOP, project.

The decision by the three firms brings to 11 the total number of (re)insurers which have committed not to provide insurance coverage for the EACOP project. This is significant because the project needs substantial levels of international (re)insurance to proceed. The firms cite the EACOP project’s potential impact on people, nature and climate as among the reasons for their refusal to underwrite the project.

“We are able to confirm that providing insurance for the EACOP project, its construction, contractors, infrastructure or operation is not within our risk appetite. Therefore, we have not and will not provide insurance services associated with this project,” said Alex Hindson, Chief Risk & Sustainability Officer at Argo Group.

RSA Insurance Group Limited officially communicated that “our underwriters follow our Climate Change and Low Carbon Policy, which means we would not provide cover to the East Africa Crude Oil Pipeline.”

Axis Capital noted the insurance firm “​​…do[es] not support the East Africa Crude Oil Pipeline” and also confirmed that they “…do not envisage supporting EACOP in the future,” in email correspondence with Coal Action Network, UK.

The EACOP and the associated Tilenga and Kingfisher oil fields are faced with widespread resistance locally in Uganda and Tanzania and globally, with over 1 million people signing a global petition against the projects. The planned pipeline is displacing tens of thousands of households in Uganda and Tanzania.

The EACOP, its associated upstream oil projects and related infrastructure such as roads, pose a threat to livelihoods, local cultures, sensitive ecosystems and wildlife, including endangered species in the Lake Victoria basin, Budongo forest, Murchison Falls National Park, Biharamulo Game Reserve and others.

“TotalEnergies insists on forging ahead with the EACOP project even in the face of substantial local and global opposition. The company downplays the negative impacts of the project while arguing that the project is good for Uganda’s economic development. The truth is that the project is only good for Total and its shareholders and not the frontline communities facing displacement and human rights violations that have harmed their livelihoods.  Financial institutions that are serious about protecting human rights and avoiding climate breakdown should rule out supporting the EACOP.” said Diana Nabiruma of Africa Institute for Energy Governance (AFIEGO), which is based in Uganda.

The news comes against the backdrop of a worldwide concern that oil companies are making a killing by harming the environment and leaving communities where their projects exist languishing in poverty.

“As oil companies continue their operations in Africa, raking in huge profits, local communities are left to deal with the negative socio-economic and environmental impacts of these exploits. We welcome the move by Argo Group, Axis Capital and RSA not to offer (re)insurance coverage to the EACOP project, a project that not only comes at a huge cost to people, nature and climate but also jeopardizes key sectors that employ the majority of people in Uganda and Tanzania such as agriculture, tourism and fisheries. We call on other financial institutions that are yet to distance themselves from EACOP to do so and seal the fate of this harmful project.” said Omar Elmawi, Coordinator of the #StopEACOP Coalition.

Isobel Tarr, insurance campaigner at Coal Action Network in the UK, said: “These commitments illustrate the growing level of rejection of the project by international (re)insurers. EACOP cannot proceed without international (re)insurance. RSA is a leading UK insurer, while Argo and Axis are members of Lloyd’s of London, the world’s largest (re)insurance market. This adds to the pressure on the other Lloyd’s members and the wider insurance market also to reject EACOP. We also call on insurers as investors to proactively support renewable energy projects in Uganda, Tanzania and throughout Africa, where such projects are not in conflict with communities or ecosystems.”

In addition to the 11 (re)insurers that have distanced themselves, 20 banks and 4 export credit agencies have committed not to provide project financing for the EACOP project.

A recent report noted that the EACOP presents various violations of the IFC Performance Standards and Equator Principles in terms of both human rights and climate impacts.