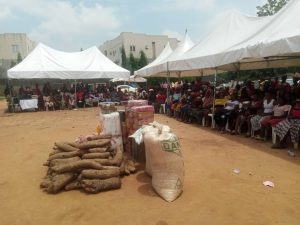 Mr Abdulakeem Alawuje, the National Coordinator of the group said that the gesture was to mobilise for the Presidential candidate of the All Progressives Congress (APC), Sen Bola Tinubu.

He said that the group was at the IDP camp to show the symbol of the APC Presidential candidate to let Nigerians know “who Tinubu is and to intimate them of his desire to turn things around’’.

He said that Tinubu hardly slept because of his concern for Nigerians, adding that for several years, he had always thought on how to get Nigeria rescued on so many challenges confronting the country.

According to him, Tinubu has not been able to sleep because of the issue of insurgency and kidnapping across the country and economic crises.

Alawuje said that Tinubu had the situation to the myriad of problems bedeviling the country, adding that the country needed Tinubu more than he needed the country.

“Tinubu does not need the country’s money, he is only coming to reactivate Nigeria system that is no more working, he is coming to put the country system to work.

He said that Tinubu has done a lot in the past especially in Lagos State, adding that met Lagos in a state of shamble and he was able to change lagos.

This. according to him is why we believe in him, is our father, is a leader, he send people to do work and he follow them up, what we are expecting from him is how to liberate Nigeria

Alawuje said that Tinubu was prepared to transform Nigeria and would also manage the country’s economy, adding that he would make the system to work.

On the issue of Muslim/Muslim ticket, he said that it would not be an issue, adding that at this critical time what Nigerians should focus “is who is the liberator and what is he coming to change in the situation’’.

He urged the citizenry to forget such differences and move on, adding that an argument based on religion would not augur well for the country.

Mr Ibrahim Karaye, the FCT coordinator said that the idea behind the gesture was to show love, and compassion to the vulnerable.

“You know we are disciples of Jagaban, we are here to honour and identify with the displaced and vulnerable people in the society.

“This is a programme that we have started and by the grace of Allah, it will continue throughout the federation.”

Mr Bankole Femi, the Legal Adviser to the groups, said, Tinubu remained a man of his words, a reformer and a detribalised Nigerian.

He said that Tinubu had a desire to go for the best, and in view of that, he identified talents that could perform.

He had laid a better roadmap in Lagos on how he wanted to build Nigeria, adding that among the contestants for the presidency, “Tinubu is the best’’.

Mrs Vera Chukwudi, one of the beneficiaries commended the group, adding that Nigerians desire a country where the economy and other things would be beneficial to the people.

The News Agency of Nigeria (NAN) reports that items distributed include cartons of spaghetti, 300 tubers of yam, three bags of rice, 400 rappers, and toiletries among others. (NAN)