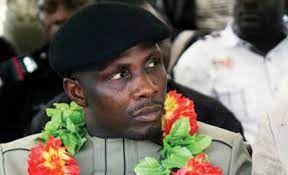 THE President and Chairman of Tompolo Foundation, Government Ekpemupolo, popularly known as “Tompolo”, has donated food items worth N150 million to the victims of recent flood that ravaged Delta, Bayelsa and Rivers.

The items were officially handed over to representatives of the victims across the three states on Monday in Warri, Delta.

Presenting the items, on behalf of the foundation, its Executive Secretary, Dr Paul Bebenimibo, said that the items included: 2400 bags of rice;100 bags of beans and 200 bags of gari.

Bebenimibo said that the donation would cushion effect of the disaster on the victims and also help them to settle down faster in their respective homes, while awaiting donations from other bodies.

“It is no longer news that our country was greeted with massive flood disaster sometimes ago; the impact was overwhelming, especially on the people of Delta, Bayelsa and Rivers.

“The Tompolo Foundation was established to care for the less privileged in the society and we have been on the mission in the last 10 years.
.
“Specifically, in 2012 when similar flood came up, we were on hand to provide palliatives for the people. This year, we have come to do same thing.

“The President and Chairman of Tompolo Foundation has approved palliatives worth N150 million to be distributed to the people of Delta, Bayelsa and Rivers.

“We are here to hand them over to the representatives of the beneficiaries so that they can move them to their destinations and distribute to the people,” he said.

Bebenimibo said that Bayelsa being the worst hit with the disaster, would received 600 bags of rice and others items.

He added that Ahoda East and West Local Government areas of Rivers, where the impact was great, would benefit from the palliatives.

“Bayelsa with seven impacted local government areas will receive 600 bags of rice and other items.

“While in Delta, we are distributing to Bomadi, Patani and Burutu Local Government Areas.

“We will also extend our hands of fellowship to Isoko, Urhobos and Ndokwa nations in the state,” he said.

Responding on behalf of Government of Bayelsa, Mr McDonald Igbadiwe, a member representing Constituency IV, Southern Ijaw, thanked the foundation for the generosity.

Igbadiwe said Bayelsa was the most impacted state with the flood, adding that it was cut off from other parts of the country.

The lawmaker said that the state government had spent over one billion naira to ameliorate the impact of the disaster on people, urging other people to emulate the generosity of Tompolo.

“The flood impact in Bayelsa can only be compared with that of Pakistan. We are riverine people, but we have not experienced such flood before.

“On behalf of the Government of Bayelsa, we appreciate what Tompolo has done by coming to the aid of people of Bayelsa.

“The Bayelsa Government and the people are happy, praying for him to live longer. We are grateful and praying God to give him sound health,” he said.

Oyibode, while receiving the palliatives on behalf of the Urhobo nation, described Tompolo as a generous leader and prayed God to continue to strengthen him. (NAN)