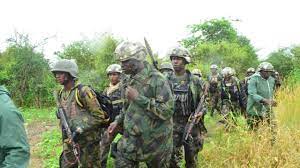 TROOPS of Operation Forest Sanity have eliminated 10 terrorists and recovered cache of arms and ammunition in recent encounters in Katsina, Kebbi and Zamfara State.

The Director, Defence Media Operations, Maj.-Gen. Musa Danmadami, made this known in a statement on Thursday in Abuja.

Danmadami said the troops had on Tuesday eliminated two terrorists and recovered two AK47 rifles and three MCs in a fire fight along Maidabino-Danmusa Road in Katsina State.

He said the troops also encountered terrorists at Dangeza village on Wednesday neutralizing one terrorist and recovering one AK 47 rifle mounted on a motorcycle with two magazines, and one Baofeng HHR.

“Troops made contact with terrorists at various locations and a fire fight ensued following which the troops neutralised seven terrorist, recovered four vehicles and eight motorcycles which were destroyed.

“The military high command commends troops of Op Forest Sanity and encourages the general public to avail troops with credible and timely information on criminal activities,” he said. (NAN)