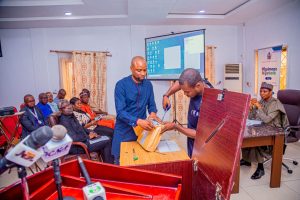 THE Nigeria Christian Pilgrims Commission (NCPC) has opened bids submitted by air carriers for the 2022 pilgrimage.

In his speech, the Executive Secretary, Rev. Yakubu Pam assured that the commission would continue to be transparent in its dealings.

Pam who gave the assurance on Tuesday in Abuja during the bid opening, added that the commission would ensure integrity of the process and in all other activities it carried out.

The executive secretary said that the successful bidders would transport and handle the pilgrims expected to perform the spiritual exercise in Israel, Jordan, Rome and other holy sites to be unveiled by the commission later.

He affirmed that one of his agenda is to fight corruption, adding, “let everyone know that NCPC is proud to represent Christians in Nigeria, integrity is not only preached here, but also practiced.”

Pam commended the Secretary to the Government of the Federation for his tireless support to the NCPC.

In his remarks, Chairman, House Committee on Pilgrims Affairs, Abubakar Nalaraba said the transparency of the bidding process would ensure the smooth transportation of pilgrims.

Nalaraba applauded the executive secretary for his tireless efforts in making the pilgrimage exercise a success through his innovative ideas that has brought light to the commission.

The Director General, Bureau of Public Procurement, represented by Mr Ojougboh Nelson, said due process must be followed to ensure that the bidding conformed with set standards.

He assured that the selection process would be free and fair.