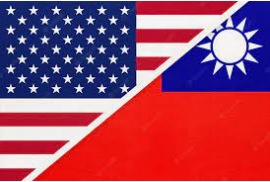 THE United States and Taiwan have announced that they will officially launch trade talks after both sides agreed on a mandate.

Both sides had set out the broad objectives for trade talks aiming to “deepen our trade and investment relationship and advance mutual trade priorities based on shared values.

The office said it was aiming for negotiations to attract more U.S. and overseas investment and pave the way for Taiwan to join international trade blocs such as the Japan-led Comprehensive and Progressive Agreement for Trans-Pacific Partnership (CPTPP).

Tariffs will not be discussed, Taiwan’s trade office said.

Washington and Taipei had unveiled the U.S.-Taiwan Initiative on 21st-Century Trade in June.

“Through economic cooperation, Taiwan and the U.S. can jointly counter economic coercion by a third country,” Cabinet spokesman Lo Ping-cheng told a news conference on Thursday.

According to the spokeman, that’s what Premier Su Tseng-chang said at a weekly meeting and Su called it a major breakthrough in the Taiwan-US relations.

Minister Without Portfolio John Deng, Taiwan’s chief trade negotiator, told the same news conference that China is mainly the country conducting economic coercion to others in the world.

The latest announcement on the talks comes after a recent visit by U.S. House Speaker Nancy Pelosi to Taiwan drew China’s ire.

After a delegation of U.S. lawmakers travelled to Taiwan a few days ago, Beijing spoke of a new “provocation” from the U.S. and announced further manoeuvres.

Prior to Pelosi’s trip to Taipei, China had launched campaign of economic coercion against Taiwan by halting imports of hundreds of Taiwanese food products temporarily .

Beijing on Thursday urged the U.S. to “stop all forms of official interactions with Taiwan, avoid signing‌‌ agreements with sovereign connotation or of official nature with Taiwan, and avoid sending wrong signal to Taiwan independent separatist forces.”

“The US should avoid‌‌ making further mistakes, China will take resolute measures to uphold sovereignty and territorial integrity;‌‌ we urge the U.S. not to make any misjudgment on this,” Chinese Foreign Ministry spokesperson Wang Wenbin said.

Taiwan has had an independent government since 1949, but China considers the island part of its territory. Beijing rejects official contacts between other countries and Taipei. (dpa/NAN)