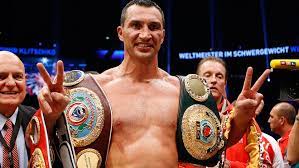 UKRAINIAN boxer Vladimir Klitschko, the brother of Kiev Mayor Vitali Klitschko will receive a media award in Germany on Thursday on behalf of the Ukrainian people.

The M100 Media Award would be handed over in Potsdam, near Berlin, alongside an event on media freedom.

“It was being awarded to Ukrainians who with heroic courage, stoic fortitude and indomitable will have been defending themselves against Russia’s brutal invasion for months now.’’

“They are defending not only their own independence but the independence of all of Europe,’’ the organisers said.

Some 60 international journalists attend the colloquium on the war and the media.

The keynote speaker at the event is German Chancellor Olaf Scholz.

Vitali Klitschko was awarded the M100 Media Award in 2014 as the representative of all democratic movements in Ukraine. (dpa/NAN)