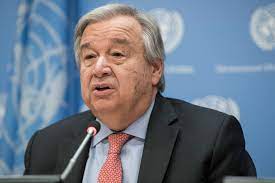 UN Secretary-General António Guterres has congratulated the people of Kenya for the peaceful voting during the general elections on August 9.

Mr Stéphane Dujarric, Spokesman for the Secretary-General said this at a news conference on Thursday at UN headquarters in New York.

“He trusts that all political stakeholders and the Kenyan people will continue to demonstrate the same level of calm.

“That they will continue to demonstrate same level of calm, patience and respect for the electoral process as they await the announcement of the results of the polls in accordance with the legal timeframe,’’ Dujarric quoted Guterres as saying.

He notes the important work done by the Kenyan authorities and electoral management bodies, the active engagement of numerous national stakeholders and the unwavering commitment of the voters to duly exercise their constitutional right to vote.

The secretary-general reiterates the availability of the United Nations to continue to support the efforts of the Kenyan authorities and people in the advancement of the democratic process in Kenya.

The Independent Electoral and Boundaries Commission (IEBC) Chairman Wafula Chebukati said in an update on Tuesday evening that voting had been concluded in all polling stations across the country and counting started.

Chebukati noted that the tallying was being done at three levels namely polling centres, constituencies and at the national stage.

At the national tallying centre, he said they are verifying transmitted images of the forms used in capturing results.

The forms are being transmitted from polling centre

However, two days after the general election, officials are yet to announce who is leading the presidential race in East Africa’s regional powerhouse.

Yet, confused citizens were seen struggled to make sense of divergent tallies from the media in a nail-bitingly close race.

Media houses are compiling results from images of forms that the election commission uploaded on to its website from more than 46,229 polling stations, a mammoth task that means their tallies lag far behind the amount of raw data available.

Meanwhile, some citizens were worried that the media’s differing tallies could inflame claims of rigging, which had sparked violence in past elections; many urged fellow citizens to wait for the official results.

“There is so much impatience due to media reports, because they are varying. Given the experience that we have in Kenya, we have to be patient and just wait,’’ said Ongao Okello, as he scrutinised newspapers being sold on a street corner in the western town of Eldoret.

Veteran opposition leader and former political prisoner Raila Odinga, 77, is making his fifth stab at the presidency. He is neck and neck with Deputy President William Ruto, 55.

The outgoing President, Uhuru Kenyatta has reached his two-term limit, he has endorsed Odinga for president after falling out with Ruto after the last election.

Kenyan election authorities have proceeded with tallying cautiously, wary of the mistakes that caused the Supreme Court to nullify the results last time and order a re-run.

Media houses have filled the information gap by recruiting hundreds of people to manually input results from the images of results forms into spread sheets.

The News Agency of Nigeria (NAN) reports that general elections were held in Kenya on Aug. 9.

Voters elected the President, members of the National Assembly and Senate, county governors of Kenya and members of the 47 county assemblies of Kenya. General elections in Kenya are held every five years.(NAN)