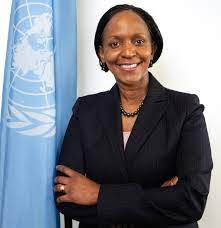 THE UN Assistant Secretary-General for Humanitarian Affairs, Ms Joyce Msuya, will arrive in Niger on Monday for a five-day visit to take part in the third High-Level Conference on the Lake Chad Basin.

UN Deputy Spokesperson, Farhan Haq, disclosed this at a news conference in New York on Friday.

Haq said the event, in Niger’s capital Niamey, would bring together governments from crisis-affected countries, international donors and partners, multilateral.

“It will also bring together international organisations as well as civil society, to recommit to addressing humanitarian needs, with more than 11 million people requiring assistance in the region.

“While in Niger, Msuya will meet crisis-affected people, as well as national authorities, humanitarian and development partners, donors and members of the diplomatic community,’’ he said.

According to him, Niger’s humanitarian crisis continues to deepen due to growing insecurity and unprecedented violence as the number of people in need has more than doubled since 2017, to 4.3 million this year.

Meanwhile, Faq said the Acting Head of UN Office for West Africa and the Sahel [UNOWAS], Ms Giovanie Biha, had just concluded a two-day visit to Conakry, in Guinea.

He said she was there to take part in the closing ceremony,  following a tour that went to several cities, called “Promoting Inclusiveness and Social Cohesion in Guinea.

“She also met with the transition authorities, the diplomatic corps, civil society and our UN colleagues.

“The caravan – as they called it in the country – was launched on Nov. 10 and supported by the United Nations.

“It aimed to foster reconciliation at national and community levels through the contributions of local cultures, and the strengthening and promotion of human rights in a socially cohesive environment.’’

In her exchanges with the transition authorities, Faq said Biha reaffirmed the UN’s commitment to supporting the ongoing transition, in close collaboration with ECOWAS – the Economic Community of West African States.  (NAN)