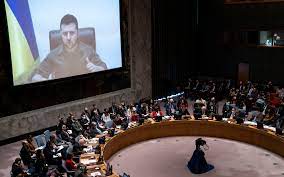 THE prospect of Ukrainian President Volodomyr Zelensky addressing the General Debate of the UN General Assembly in New York in person next week is looking increasingly unlikely.

However, several diplomats in New York told dpa on Wednesday that a resolution was in the works that would give Zelensky permission to instead deliver his speech to fellow world leaders via video.

A simple majority of voting nations in the General Assembly was needed to allow the move, with a vote potentially happening on Friday.

If Zelensky participated in the event in person it would mark his first time travelling abroad since the start of Russia’s war on Ukraine.

A video address would give Zelensky a big platform, especially given Russian President Vladimir Putin’s decision not to attend the meeting this year.

Russian Foreign Minister Sergei Lavrov would travel to the event to represent Moscow.

The UN General Debate begins at the United Nations in New York on Tuesday, with over 150 heads of state and government expected to attend.

Russia’s invasion of Ukraine is expected to dominate the agenda at the multi-day meeting. (dpa/NAN)