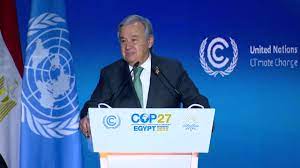 UN Secretary-General, Antonio Guterres has decried the breakdown of trust between the global North and South at the ongoing 27th session of Conference of Parties (COP27) on Climate Change in Sharm El Sheikh, Egypt.

Guterres in his remark at COP27 briefing on Thursday, said the breakdown in trust between North and South, and between developed and emerging economies was a recipe for mutually assured destruction.

“This is no time for finger pointing. The blame game is a recipe for mutually assured destruction.

“I am here to appeal to all parties to rise to this moment and to the greatest challenge facing humanity. The world is watching and has a simple message: stand and deliver,” said the UN scribe.

Guterres urged the parties to deliver the kind of of meaningful climate action that people and the planet so desperately needed; as global emissions were at their highest level in history and still rising.

“Climate impacts are decimating economies and societies and growing. We know what we need to do and we have the tools and resources to get it done.

“And so I appeal to the parties to act in three critical areas. First, the most effective way to rebuild trust is by finding an ambitious and credible agreement on loss and damage and financial support to developing countries.

“The world is burning and drowning before our eyes and I urge all parties to show that they see it and get it.

“Send a clear signal that the voices of those on the frontlines of the crisis are finally being heard. Reflect the urgency, scale and enormity of the challenge faced by developing countries.

“We cannot continue to deny climate justice to those who have contributed least to the climate crisis and are getting hurt the most. Now is a moment for solidarity, said the UN chief.

He also appealed to all parties to forcefully address the huge emissions gap, noting that the 1.5 target was not simply about keeping a goal alive, but it’s about keeping people alive.

“I see the will to keep to the 1.5 goal – but we must ensure that commitment is evident in the COP27 outcome. Fossil fuel expansion is hijacking humanity.

“Any hope of meeting the 1.5 target requires a step change in emissions reductions. We cannot close the emissions gap without an acceleration in the deployment of renewables.

“The Just Energy Transition Partnerships are important pathways to accelerate the phasing out of coal and the scaling up of renewables. This effort must be expanded,” he said.

Guterres also called for the delivery of the $100 billion in the climate finance for developing countries by the developed world.

The parties, he said must act on the crucial question of finance as it meant clarity on how the doubling of adaptation finance will be delivered through a credible roadmap.

“We have agreed solutions in front of us to respond to loss and damage, to close the emissions gap, and to deliver on finance. The climate clock is ticking, and trust keeps eroding.

“The parties at COP27 have a chance to make a difference here and now. I urge them to act — and act quickly,” the UN boss appealed. (NAN)