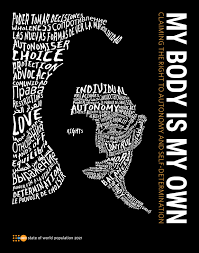 THE United Nations Population Fund (UNFPA), Cross River Office, has launched its 2021 State of the World Population (SWOP) Report with the theme “My Body is my Own: Claiming the Right to Autonomy and Self-Determination.”

Dr Omolaso Omosehin, Head, UNFPA, Cross River Office, said at the ceremony on Friday in Calabar that SWOP was a publication launched by the agency every year since 1978.

He said the purpose was to draw attention to reproductive health issues of women and girls.

Omosehin said for 2021, the agency was looking at the bodily autonomy of women.

He said UNFPA believed that it was a fundamental human right of every woman and girl child to be able to own and decide what they wanted to do with their bodies.

“The report seeks to bring to the attention of the public and individuals of the right of women to say no when they want to say no as well as their right to contraception.

“It also tries to let the world know that Female Genital Mutilation (FGM) should be abolished because of its medical and physical implications,” he said.

The head of UNFPA office in Càlabar said that FMG was a violation of the fundamental human right of the girl child.

“We have also highlighted the fact that we must look at the marginalised population in our communities that are not usually taken care of,” he added.

It will be recalled that in an earlier report, Dr. Natalia Kanem, the Executive Director of UNFPA, asserted that “a denial of bodily autonomy is a violation of fundamental human right.”

Gov. Ben Ayade of Cross River said it was pertinent to reiterate the state government’s commitment in joining hands with relevant agencies to rid the state of harmful practices against girls.

Ayade, represented by the Secretary to the State Government, Mrs Tina Agbor, said the theme gave women and girls the power to make choices about their bodies without fear of harassment or intimidation.

“From the report, it shows that hundreds and millions of women and girls around the world do not own their bodies and their lives are governed by others.

“In Cross River, the practice of ‘money marriage’ which was predominant in the northern part of the state has been abolished as our girls are no longer subjected to such practice.

“This resulted in my decoration as a ‘He4She Ambassador’ alongside the Paramount Ruler of Obanliku, His Majesty Uchua Uyimulam.

“Ours is an inclusive agenda to ensure that the rights of our women and girls are protected, hence the involvement of our traditional institutions to give it the much needed attention it deserves”, he said.

The governor thanked UNFPA for its support and commitment to the healthcare of the people of the state through the provision of medical supplies, upgrading of the state’s School of Midwifery and the Fistula Centre at the General Hospital Calabar, among others.

He however appealed that UN linked the state to other international development partners to further support it. (NAN)