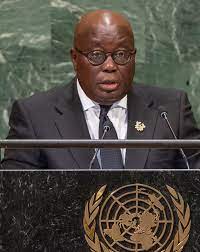 THE Ghanaian President Nana Akufo Addo has called on the investor community to support the roll-out of Africa’s lucrative agro-industry.

He also called on the community to see agrobusiness in Africa, more of an opportunity, rather than the perceived, exaggerated risk.

The President of Ghana made the call at the ongoing UN General Assembly in New York.

Akufo-Addo told the world leaders that “Africa is ready for business. Africa needs you and you need Africa.

“You need Africa because Africa is busily building the world’s largest single market of 1.3 billion people.”

He went on to add that Africa is the new frontier for manufacturing, for technology, for food production.

President Akufo-Addo’s address to the Assembly’s 77th annual high-level debate centered largely on the issue of global economic challenges and the need of performative solutions for the African economies.

He said it was doubtful that any generation of Earth’s inhabitants had ever witnessed “such a perfect storm of global economic chaos, a war with global consequences, and an unwillingness or inability to find a consensus to deal with the catastrophe

Recalling that COVID-19 had pushed Africa into the worst recession for half a century, he said: “The World Bank observed, last Thursday, that the global economy was enduring its steepest slowdown since 1970.

Two years ago, our world came to a thundering halt, as we cowered from a health pandemic from an unknown, malicious virus, coupled with a devastating global economic pandemic. High budget deficits were no longer a concern of only developing nations.”

Referring to Russia’s invasion of Ukraine, that aggravated an already difficult situation, he added, “Every bullet, every bomb, every shell that hits a target in Ukraine, hits our pockets and our economies in Africa.”

Several African countries had inflation rates surging three to four times higher than what they were just two years ago. Ghana was experiencing the highest inflation for 21 years, he stated.

President Akufo-Addo highlighted that the international financial architecture was skewed significantly against developing and emerging economies like Ghana.

He noted that “the tag of Africa as an investment risk is little more than, in substance, a self-fulfilling prophecy created by the prejudice of the international money market, which denies us access to cheaper borrowing, pushing us deeper into debts”, thus underscoring the necessity for reform of the system.

The Ghanaian President stated: “We do not have the luxury of being able to pick and choose which big problem to solve.

“None of them can wait; the economic turbulence requires urgent and immediate solution; the turmoil and insecurity in many parts of the world require urgent attention; and so does the need to tackle the problems posed by climate change.”

He also referred to the security situation in the area of the Economic Community of West African States (ECOWAS) and expressed disappointment over the fact that all of Ghana’s neighbors had suffered terrorist attacks, and some have lost territorial space to the invading forces.

At the same time, he determined to reverse these unfortunate developments.

Remembering Ghana’s first President, Kwame Nkrumah, who would have been 113 years old today, he recalled driving force of De Nkrumah’s political career, which was to contribute to the birth of a united Africa, or a ‘United States of Africa’. (NAN)