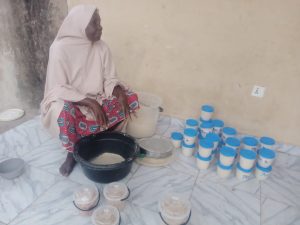 DETERMINED to contribute to the growth and development of under-five children in Bauchi through complementary feeding, a Bauchi-based volunteer has produced over 300 containers of ready to use food for malnourished children in Katagum local Government Area (LGA) in Bauchi state.

This gesture was conducted under the initiative of Uwatagari Women Multipurpose, meaning  ‘Kind Mother’.

The volunteer, Hajiya Uwani Umar, told News Agency of Nigeria (NAN) in an interview on Monday that the gesture was to contribute to the well being of children.

Umar said that each beneficiary is to be fed for two weeks as treatment for malnutrition.

According to her, each beneficiary will locally produce food that includes; Wheat, Soy beans, Millet, and Groundnut.

“I have distributed these in almost five locations, including Primary Health Centers, including Bulkachuwa where I supported 30 children, Magonshi, 45, Madagala, 50, Matsango, 60, Bayan Fada, 60,” she said.

Narrating her ordeal, Umar said that the food was first adopted to feed her adopted babies.

“I adopted two babies from birth, so I had to start feeding them well using local grains.

“The two babies grew healthily and I now decided to support babies and their mothers that are most vulnerable.