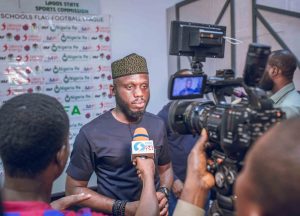 THE Nigeria America Football Association (NAFA) has expressed its determination to develop youths through the game to compete in international competitions.

Mr Babajide Akeredolu, NAFA President, expressed the commitment at a news conference to unveil U-18 national teams in Lagos.

The News Agency of Nigeria(NAN)reports that the teams are composed of students of secondary schools.

He said that, in the past two years, NAFA had strived to meet its mission to create more opportunities through the game of American football.

“Today marks a great milestone for us as an organisation as we are excited to see our growth trajectory as one of the fastest growing sport entities.

“We are excited to announce the establishment of the first Under-18 national teams for ‘Flag Football’ which is being positioned to compete in future International championships,” he said.

Akeredolu said that to achieve its aim, NAFA engaged over 12 young American football enthusiasts all over Lagos to assist in assessing potential players.

According to him, criteria such as speed, football acumen, agility, reaction and throw ability were leveraged to rank the players to come up with elite squad.

“This is only the beginning of the process as training and capacity building  will be embarked upon to prepare boys and girls for the international arena.

“I will like to use this opportunity to thank all our facilitators for a job well done throughout the process and we look forward to working with them.

“NAFA has experienced fast and steady growth due to the acceptability and strong embrace of American Football in Nigeria.

“We have been very satisfied with the level of acceptance, we have also ensured equal representation, inclusion and diversity,” he said.

Akeredolu further said that the association was happy to bring Nigeria into the multi-billion dollar industry.

He said that Nigeria had the highest number of players of African descent in the American Football League.

According to him,the number is 10 times more than that of any other nation in the world, except Americans who own the league.

“The pathways to growth and participation in the sport are tremendous and we have focused commitments to engage youths and create more opportunities for them.

“We are also proud to say that within these few years, we have seen Lives transformed already through this sport.

“If we can achieve this much within such a short period of time, then we see potential to revolutionise the sports industry in Nigeria and Africa at large,” he said.

NAN reports that the U-18 national team players were selected after a training, that attracted no fewer than 90 students from various schools in the state.

At the end of the drill held between Sept. 14 and Sept. 16,  28 male players and 28, female players were selected to make the final cut.

NAFA said that in future, their are plans to bring eight more states onboard for the second season of the Nigerian Secondary School Flag Football league,

This will give the best players the opportunity to try out for the U-18 in the next camp.(NAN)