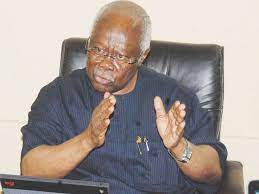 A chieftain of the Peoples Democratic Party (PDP) Bode George, has opined that the party may be defeated in the 2023 presidential election.

George, who disclosed this at a press conference in Lagos also asserted the need for Iyorchia Ayu to quit his position as the party’s National Chairman.

His words: “We should not allow any sentiment – ethnicity or religion to divide us. Unfortunately, with what we are presently witnessing, our party may lose the next presidential election if we continue to disregard or fail to address the feeling and grievances of ‘alienation’ being presently experienced by the entire Southern population of this great country.

“If this issue is dismissed, we cannot expect votes from them.

“Until this party returns to the founding fathers’ principles of unity, with equity, fairness and justice being the pedestal for any political decision taken in this party, and ensuring broad-mindedness to accommodate the concerns of all zones in this country, PDP becomes vulnerable to disaster in the 2023 elections,” he said.

“Some people are insisting that there is nothing wrong with this present arrangement. Some have argued that this happened during Chief Olusegun Obasanjo’s administration, where the candidate and the national chairman were from the same zone.

“Let the truth be told, there are remarkable differences in the scenario then and now. Then we had the leader of the party who was then a sitting president from the South and the candidate was from the North.

“In addition, the National Chairman, Dr Ahmadu Ali, was then on his way out. Today we have no sitting President from our party in Aso Villa so, that argument falls flat. We need to stop playing games and being zombified.

“Let me summarise the genesis of the current crisis.

“As envisaged by the founding fathers of our party, there are six top positions in our Country: President, Vice President, Senate President, Speaker of the House of Representatives, Secretary to the Government of the Federation (SGF) and National Chairman of the party.

“Presently we are not in government, therefore we only control three of these six positions namely: Presidential, Vice Presidential Candidates and National Chairman.

“I remember that Dr. Iyorchia Ayu said pointedly that if the Presidential Candidate emerges from the North, he would resign for a new National Chairman to emerge from another zone before the presidential campaign starts.

“The other three positions are futuristic. It is only when we win the elections that we will fill these positions namely: the Senate President, the Speaker and the Secretary to the Federal Government.

“As a result of the need to have inclusiveness, oneness and togetherness, it does not make any political sense for the Presidential Candidate and the National Chairman to come from the same zone. Now, we have a situation in which some elders are saying “it does not matter”. Can we go into the election with Alhaji Atiku Abubakar and Dr. Iyorchia Ayu, from the same zone, leading our National Campaign?