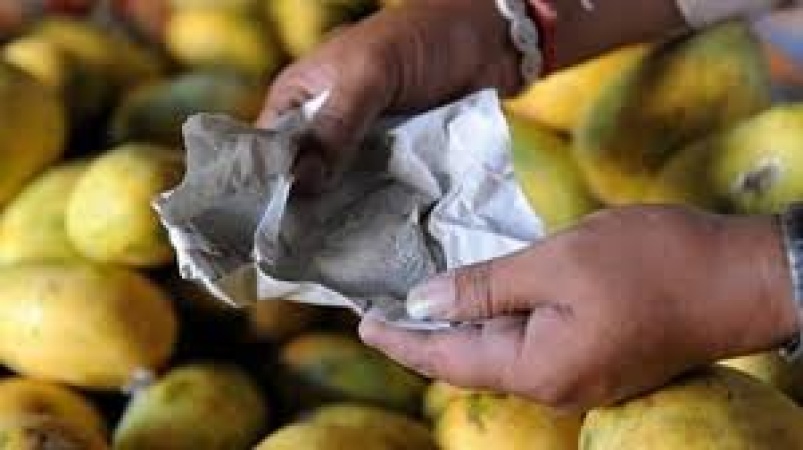 Although the National Agency for Food Administration and Control, NAFDAC has continued to harp on the dangers of consuming fruits forcefully ripened with some ripening chemicals, as well as threatening to prosecute fruits sellers, who indulge in this act, there is need for a legislation banning the use of such chemicals as the practice seems to have become acceptable as sellers have continued to indulge in the act, while buyers are still patronising them.

RIPENING is a genetically programmed, highly coordinated irreversible phenomenon which includes many biochemical changes including tissue softening, pigment changes, aroma and flavour volatile production, reduction in astringency and many others, according to the International Journal of Food Science.

It is mostly for commercial and economic gain that people tend to bypass the natural process of fruit ripening by applying certain chemicals like ethylene gas, acetylene gas liberated from calcium carbide, and ethephon widely used for their effectiveness on initiating and accelerating the ripening process.

In April 2018, Edward Pwajok, a Nigerian lawmaker moved a motion urging the National Agency for Food and Drug Administration and Control (NAFDAC) and the National Orientation Agency (NOA) to immediately carry out massive enlightenment to sensitise the public.

Pwajok’s argument was specifically directed at the dangers of using calcium carbide to forcefully ripen fruits in Nigeria. According to him, traders, fruit dealers, in a bid to make inordinate profit and capitalize on the huge national demand for fruits, especially mango, banana, plantain and oranges, use the chemical – calcium carbide – to ripen fruits.

Professor Mojisola Christianah Adeyeye, Director-General of the agency during a sensitization campaign in Onitsha, Anambra State early in September warned sellers of fruits such as oranges, banana, plantain and many others to desist from using carbide to ripen them or risk being arrested, reports the Daily Post.

According to her, carbide has enormous negative implications on the health of the people, hence, should not be used on fruits and that it could cause liver diseases and many other health challenges, including frequent thirst, irritation in mouth and nose, weakness, permanent skin damage, difficulty in swallowing, vomiting, skin ulcer and so forth.

“Calcium Carbide is alkaline in nature and erodes the mucosal tissue in the abdominal region and disrupts intestinal functions.

“Other symptoms of poisoning include diarrhea (with or without blood), burning or tingling sensation in the abdomen and chest difficulty in swallowing, irritation in eyes/skin, sore throat, cough, shortness in breathing, numbness etc.’’

NAFDAC DG also appealed on Nigerians to be on the alert and report anyone found using the substance to ripen fruits to the nearest NAFDAC office or any law enforcement agency.

“In the past four years, we have been intensifying efforts to tackle the menace. We have held several sensitization fora for fruit and vegetable sellers across the country.

“This is because cases of cancers, kidney disease, liver cirrhosis that have been noticed in various hospitals across the country are traced to some of these sharp practices.

“To that extent, NAFDAC is intensifying its campaign and also appealing to fruit sellers to stop the practice and also cautioning prospective buyers to be vigilant about the nefarious activities of some people.

“All hands must be on deck to enlighten our people to allow fruits ripen naturally as it is obtained in the past. But now people just want to make quick gains at the detriment of public health.

“We are appealing to Nigerians to be on the alert and NAFDAC will not hesitate to deal severely with anyone that is apprehended for ripening fruits with carbide because our officials are already on surveillance watching.

Worst still is that fruit vendors in Nigeria have perfected the act of artificial fruit ripening and are mostly motivated by the quick profit they want to make at the expense of the health of the unsuspecting consumer.

According to NAN report, a plantain seller at Sabon Gari Market, Kano city, revealed that some of the plantain sellers still used artificial ripening substances like carbide to force the fruits to ripen, especially during harmattan season.

He said: “I normally buy green plantain from the market and put it inside a special leather in a box and store it for three to four days for it to be ripen.

“Sometimes if we need ripe plantain urgently, we apply carbide and it takes only one day for it to be ripened and ready to be sold out.

Realnews reports that some consumers complain that although they are aware of the harmful effects of chemically ripened fruits, it is still very difficult to detect such fruits.

Fredo, a consumer, says that all ripe fruit look alike to him. “I love banana, and as long as it is ripe and affordable, I get it, I don’t usually see any difference,” he said.

Similarly, Grace Olasumbo, a Nutritionist, has advised Nigerians to be wary of fruits and vegetables that do not have uniform colours, especially when they appear with yellow and green patches.

She added that careful physical examination of the fruits before buying would save Nigerians from having these diseases.

The News Agency of Nigeria reports that Olasumbo’s advice followed the federal government’s concern over the dangers in using carbide and other chemical substances to forcefully ripen fruits and vegetables.

The nutritionist noted that fruits and vegetables that appear in such manner are  indications of artificial ripening, which is most prevalent at the beginning of the fruit season.

“This is the same chemical that is used to manufacture fire-crackers; they are also used as pesticides.

“They contain phosphorous and releases acetylene gas, which hastens the ripening of fruits.

“When an individual takes in such poisonous substance, the chemical components would cause a fatal reaction which could affect the liver, kidney and throat.

“Intake of Calcium Carbide has also been found to be the leading cause of various health conditions such as diarrhea, severe gastrointestinal upset, eye problems, ulcers and emotional trauma.

“Others are restlessness, seizures, tremors, irritation of the skin, mouth, throat, liver and cancer,” she said.

She advised that people should pick their fruits wisely at the stores or markets.

“Fruits such as bananas, mangoes, apples, watermelons, orange, peers, among others, should be properly checked.

“Most times, the colour of the fruits will not be uniform; it may have yellow and green patches unlike when it naturally ripens.

“The texture will also be hard even when it appears yellow.

“The fruits will also be low on flavour, less juicy and often will not be as sweet as they should,” she added.

The nutritionist advised Nigerians to ensure adequate washing of fruits and vegetables before consumption and once the taste is odd, they should discontinue its intake.

Although NAFDAC have continued to appeal to fruit dealers to refrain from using chemicals to ripen fruits, there seem to be no legislation banning the use of these deadly chemicals as alleged by a lawmaker representing Rivers state, Abiante Awaji-Inombek.

According to him, NAFDAC is paying little or no attention to food processing, but is giving more time for drug matters.

He added that “Parliament needs to re-define what NAFDAC is doing and widen its scope.”

Some other lawmakers have advised NAFDAC to swing into action and put a stop to this unhealthy practice. They also said that NAFDAC should constitute a team that should go round farms where fruits “are forced to ripe”.