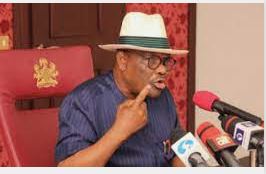 GOVERNOR Nyseom Wike of Rivers State has accused the National Chairman of the Peoples Democratic Party (PDP), Senator Iyorchia Ayu, of exploiting delegates and manipulating the presidential primary which saw Atiku Abubakar emerge as the party’s flagbearer for 2023.

Wike in a media chat on Friday, further alleged that Ayu called several presidential aspirants to step down for the former vice president during the primaries.

“He was calling aspirants to withdraw for Atiku. I was there, Saraki and others were there.

“He manipulated the delegates. There was nothing Ayu did not do to ensure Wike didn’t emerge,” the governor declared.

Wike’s comments are the latest trailing the crisis within the PDP where a faction of the party seeks to remove Senator Ayu, a cause which the Rivers State governor says became imperative, seeing that no southerner occupies any of the top three positions in the PDP.

In his chat with reporters the governor explained that when Ayu was canvassing to become leader of the party, the former Senate President would not allow him rest, pleading to be given a chance to unite the PDP.

The governor further asserted that it was to his dismay, that Ayu got into office and began to do the opposite of all he had sworn to uphold within the party.

The case against Ayu

“So, cleverly, they now came up to say, ‘well, since people have already bought forms, there is no need to zone’”.

At that point, Wike said he knew the move would cause problems but decided to go in for the campaign and gave it his all.

“We went for the primaries and we campaigned seriously. And they were shocked because if you look at the modus of our campaign, nobody was the DG. Nobody was anything, you never know… because we didn’t want to allow anybody to approach people to be moles.”

According to the governor, the success of the campaign became a problem and a source of concerns for other candidates and as such, a series of meetings were held.

“A whole National Chairman threatened some of the presidential aspirants at that time that if Wike wins he was going to resign. In fact, he was calling aspirants to withdraw for Atiku Abubakar. Bala Mohammed (Bauchi Governor) is there. (Bukola) Saraki is there; Tambuwal is there.

“Meetings and meetings and meetings were called. You must withdraw, if not we will lose. Wike will win. Some of them said but the issue is not about Wike, we want to run. This is the national chairman of a party, who is supposed to be the chief umpire,” Wike narrated.

He said this continued even until the day of the primaries, adding that this was the reason the PDP’s primary election kicked-off “very very late”.

“So, what was going on? Meetings upon meetings upon meetings. Putting pressure (on aspirants to) step down. Some retired generals were involved. Some of the meetings were held in their houses. But even in the committee of the convention, when we met in Benue Governor’s lodge with the National Working Committee, I raised it. I said, ’National Chairman, these people you are forwarding as chairmen of these committees are all known supporters of Atiku Abubakar.

“Ayu swore ‘oh, no’. I said look, ‘Just to let you know that if we don’t want this convention, we would have gone to court but we don’t want the party to be in crisis. Therefore, do the right thing so that at the end of the day all of us will be happy that the party has done a good convention and a winner has emerged without rancour.

“We are an opposition party, we are not in the ruling party. Therefore, we must conduct ourselves in such a way that there should not be internal crisis that may not be resolved before the general elections.

“There was nothing Ayu didn’t do; manipulation of delegates list… there was nothing he didn’t do. And, unfortunately, today, the numbers are not adding up. There is nothing they didn’t do to make sure that Wike did not emerge (as winner).

“So, we went to the convention and they came. You remember I spoke last based on alphabetical order. And when I came out to speak, of course, there was danger.

“The ovation was thunderous so it became a problem to them. To tell you, and I was highly disappointed by the former Senate President. Very experienced, very civil. All these things were set up to manipulate the system. Senator David Mark; he was the Chairman of the Convention planning committee. It has never happened in the history of elections.

“In fact, when you are speaking, whatever thing you want to do, it is at that point you will say it. But everybody has spoken, I have spoken. We have now sat down for them to commence voting, (that’s when) a whole Chairman of Convention Planning Committee said there was an announcement. It has never happened anywhere.

“The announcement we were thinking would be for security reasons, don’t pass this way or ‘there is something we just picked up; I don’t know if anybody has lost anything — your phone or whatever’. Such announcements is expected. But (the announcement was) to give back the microphone to Tambuwal to come again and speak after everybody has spoken to say ‘My brothers I want to withdraw’.

“Not even saying you want to withdraw, you now went ahead to say that his people should vote for Atiku Abubakar. At that point, if not for the love of the party we have, if we don’t love this party, that convention wouldn’t have held. There would have been crisis in that convention.”

Wike also accused Ayu of being very corrupt, when told that that was a weighty allegation and asked if he had evidence, he challenged Ayu to deny the allegation.

“Listen, Ayu has the opportunity to challenge me. I will name, I said I will name. I told you I was going to speak; am I not speaking today? Even some of the governors can tell you.

“Look, will he deny that he collected one billion from Lagos? Let him deny, I will tell you who gave him the money; not Lagos government. The money was given to him in Lagos. He met one of the presidential aspirants and told him that he is not sure these governors will want to sponsor the party.

“Let Ayu say no. I will even call some of the business men and how the money was arranged in Lagos. That money did not enter into the account of PDP. But we are not attacking Ayu on that basis. Look I am not any governor. I am a serious governor. I can’t just come here and begin to say anything. I say I challenge (him).