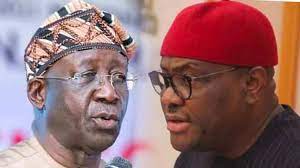 Wike challenges Ayu to suspend him from PDP and see the repercussions.

RIVERS State Governor Nyesom Wike has dared the national chairman of the Peoples Democratic Party (PDP), Senator Iyorchia Ayu, to suspend the G-5 governors and see if the party would be able to withstand the storm that will follow.

Speaking on Saturday at the campaign flag-off rally of the State PDP Campaign Council in Bori, Khana Local Government Area of the State, Governor Wike boasted that the G-5 governors are above the threat of suspension.

“We are above that level that you think you can threaten anybody; intimidate anybody with whatever illegal decision you have taken.”

Reacting to the dissolution of the Ekiti State executive committee of the Iyorchia Ayu-led National Working Committee (NWC), Wike described it as an act of tyranny that would be challenged in court.

He warned that the resort to despotism by the PDP National Working Committee would not do the party any good in the forthcoming general elections.

Governor Wike said that the reason why the dissolution of the Ekiti State working committee would be challenged in court was that there were still members of the PDP who believed in the rule of law and that the party should respect its constitution.

“Let me also use this opportunity to say to Iyorchia Ayu and his team, your dissolving Ekiti State Exco will not help you in anyway.

“Your suspending people will not help you in anyway. The battle line has been fully drawn. As I speak to you, we will do everything legally possible to challenge any decision we know is illegal.

“So, don’t think you can threaten people by saying so, so persons have been suspended. Rubbish! Completely rubbish.”

He stressed that the Ayu-led NWC resort to tyranny would do more damage to the PDP as far as the coming general election is concerned.