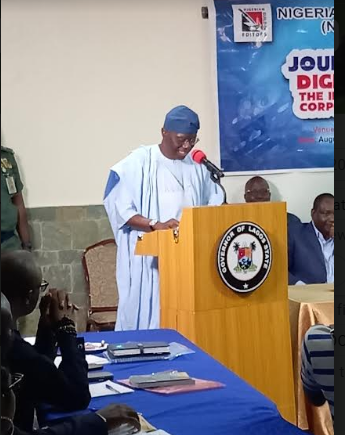 GOV. Babajide Sanwo-Olu at the NGE workshop in Lagos on Thursday

GOV. Babajide Sanwo-Olu of Lagos State says digitalisation has come to stay, and everyone must realize that with it, things have changed very fast.

Sanwo-Olu gave the advice in Lagos on Thursday while declaring open a two-day workshop on Good Corporate Governance, organised by the Nigerian Guild of Editors (NGE).

The workshop has the theme, “Journalism and Digitalisation: The Imperative of Good Corporate Governance”.

The governor described the theme of the workshop as “apt and speaking to the reality of where we find ourselves”.

He said that digitalisation had changed for instance, the way news sometimes breaks, leaving newsrooms to do follow-ups after the news was already out.

Sanwo-olu said that with the reality of digitalisation, there was also the need for good corporate governance to ensure things were done properly.

He described journalism as a noble profession that gives the public independent assessment and holds the government accountable.

The governor emphasised the importance of freedom of the press, but said there was the need to be circumspect and to eradicate fake news by verifying before posting on digital platforms.

He urged the media to abide by ethics of the profession and regulate themselves appropriately.

Sanwo-Olu said that his administration identified the importance of technology and gave it an important place in its THEMES agenda.

The governor said that the state government was laying the first phase of 3000 km fibre optic connectivity ducts in the state.

He said they hoped to start the second phase of another 3000 km by the beginning of next year.

Sanwo-Olu said this was to bring internet closer to the people.

He said some global companies were also bringing in infrastructure that would drive down the cost of internet connectivity and make it cheaper.

The governor urged the media to take advantage of these initiatives..

Earlier in his speech, NGE President, Mustapha Isah, said that digital journalism had introduced changes which the traditional media were adopting to transform the information space.

He urged media experts and practitioners to take advantage of the convergence and other opportunities to ensure the traditional media remained relevant.

Isah restated the importance of freedom of the press and urged the media to also embrace good corporate governance.

The NGE president expressed reservation with the way the federal government imposed some fines on  media houses.

Earlier, Lanre Idowu, NGE fellow and Chairman of the occasion spoke on the evolution of journalism in Nigeria and the birth of digital media.

Idowu enumerated changes by the online platforms and how the traditional media could still remain relevant with market shares without sacrificing ethics and professionalism.

“I have no doubt that there will be need for better and relevant training that will include more audience research and astute business management,” he said.

Also, Lanre Arogundade, Executive Director, International Press Centre  in a goodwill message said that the journalism profession was a “continuous conversation” hence, the need for experts to speak up more against harsh regulatory policies.

She said it would address threats posed by citizen journalism taking over a large chunk of the media space.

Chigbo added that there was the need for media owners and practitioners to be proactive.  (NAN)