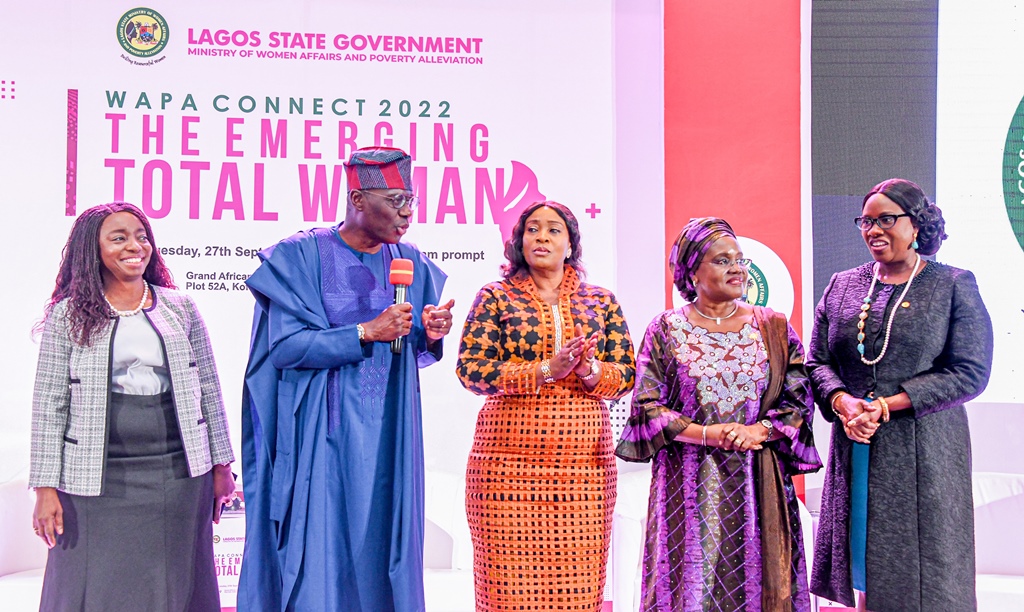 GOV. Babajide Sanwo-Olu of Lagos State says women around the world are now taking their rightful positions across all sectors.

Sanwo-Olu said this while delivering his keynote address at the Lagos State Ministry of Women Affairs and Poverty Alleviation Year 2022 WAPA Connect Conference, with the theme: ”The Emerging Woman,” held at Victoria Island on Tuesday.

He said that women were no longer asking for permission, but harnessing their potential to reach their goals.

Sanwo-Olu said the characteristics and potential of women were fully demonstrated in the world of athletics by Tobi Amusan and Ese Brume.

He said the dual, who by sheer determination to achieve their goal against all odds conquered the world, by not only becoming world champions, but also breaking existing records to set new ones.

The governor said that their remarkable success has once again demonstrated that there was no limit to the height a woman could attain with commitment, determination and the will to succeed.

He said that the new Prime Ministers of Italy, UK, Finland and Turkey; and the European Union’s Ambassadors to Nigeria are all women.

”There is no gain saying that you all have achieved different levels of success against all odds in your various endeavours.

”However, the real issue that must be of serious concern to us is how do we support, inspire and encourage young emerging women to arrive at their destination against all odds.

”It is important that we accept this responsibility to guarantee a better future in a socio-economic ecosystem that is increasingly become more competitive,” Sanwo-Olu said.

He said that the conference was in pursuance of the government’s commitment to harness the potential of both the male and female genders, as the sure path to attaining the state’s full growth and development potentials.

Sanwo-Olu said that the theme of the year’s conference – ”The Emerging Woman” spoke to the changing dynamics driven by the new thinking of the 21st Century.

According to him, the emerging woman the world is craving is one that is self-aware and determined to overcome stereotypes and unleash her potentials to contribute her fair quota to moving the society and humanity forward.

He said that the government was committed to improving the welfare of women and raising their capacity to become self-sufficient and self-reliant.

”We have, in the past three and half years developed and implemented initiatives, policies and programmes that have directly benefitted women in the state,” Sanwo-Olu said.

Sanwo-Olu said that there was a dire need to advance discussions on the emerging opportunities for women in a rapidly changing and dynamic world.

She said that such discussions would help to galvanise and prepare women to maximally benefit from such new opportunities.

Mrs Bolaji Dada, the Lagos State Commissioner of Women Affairs and Poverty Alleviation (WAPA), said that the WAPA Connect Conference was targeted at bringing together formidable women to form a synergy of economic sustainability, towards a better society.

Dada said that the programme engendered the opportunity of progressive entrepreneurship through empowerment initiatives for women, even as it translated to economic wealth for their various families and Lagos State.

”We are interested in supporting numerous households through developmental strategies that are directed at financial independence and economic growth,”she said.

According to her, the ministry has impacted positively on the lives of young and indigent women through its various skills acquisition programmes of social, economic and agricultural development.

She commended Gov. Sanwo-Olu for his unflinching support in engaging and empowering women in the state through WAPA.

Dada said that the governor had fulfilled his promise at the inception of this administration to eradicate poverty among the citizenry, especially women, to achieve a healthy and economic viable state. (NAN)