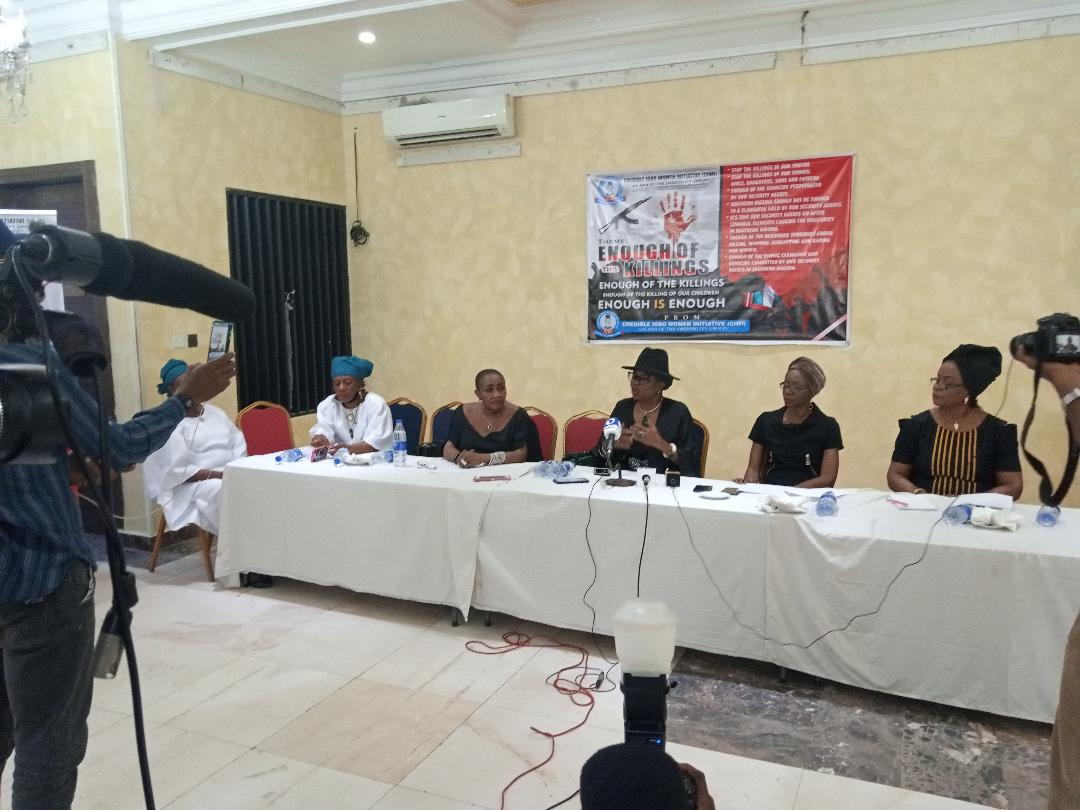 IGBO women under the auspices of Credible Igbo Women Initiative, CIWI, an arm of the Credibility Group, has called on the federal government stop the reckless killings and bloodletting going on in the country, especially in the South East.

CIWI stated this in a communique read by Elvira Salleras at the press conference in Lagos, on Thursday, June 10.

The group comprising representatives of Igbo women from all the south eastern states including Anioma in Delta State and others from all works of life, said the communique was done against the backdrop of “the alarming level of insecurity in Igboland and in Nigeria, generally resulting in lives being wasted daily, the reckless spilling of the blood of our children by security operatives with impunity, every day;

“The militarisation of Igboland and apparent threat by the federal government of Nigeria to apply maximum force in dealing with the problem of insecurity in Igboland, and the fact that the constitution of the federal republic of Nigeria in section 14(2) states unequivocally that the security and welfare of the citizens shall be the primary function of the government.”

As a result these, the women stressed that the federal government is obliged to protect all the peoples of Nigeria, including Igboland which is currently under heavy armed attack by air and land, daily.

The group is “Deeply saddened by the wanton destruction of public facilities and the targeted killings of security operatives and public servants by unknown and extend our condolence to their families and loved ones.”

It vehemently condemned the activities in Igboland by both known and unknown gunmen, arsonists, and brigands whose actions are clearly calculated to create an atmosphere of civil unrest, noting that they are not acting under the authority of Ndigbo.

According to the group, “The sustained political instability in Igboland has resulted in the breakdown of law and order with aberration of our innocent children being dragged out of their houses, cars and even pedestrian walks, captured, arbitrarily branded IPOB members by security forces and with impunity, often summarily executed without trial. Those captives that survive the ordeal are subsequently displayed to the press as proof of the security forces’ success

Part of the communique states: “Our children are thus daily dehumanized to the extent that concerned citizens such as Archbishop Obinna of Owerri Archdiocese has raised the alarm on unidentified corpses in the morgues. Such concerns have been reiterated by corporate bodies such as the Nigeria Bar Association, NBA, which has decried the grossly overcrowded detention centers in Aligbo.

“Our farmers have lost their means of livelihood and at times even their lives because of the invasion and destruction of their farms by herdsmen and their cattle due to the Federal Government’s stance on open grazing.”

It noted that “the systematic neglect of our youths over the years through lack of social and financial incentives, scholarships, and skills acquisition support have resulted in mass unemployment and distortion of the social fabric.”

The women, who vehemently condemned the activities of both known and unknown gunmen, arsonists, and brigands in Igboland, said their actions are clearly calculated to create an atmosphere of civil unrest.

The women also observed with deep concern that the market men and women continue to suffer greatly in the hands of security forces in Igboland with the result that markets and shops are often under lock and key and are constantly looted with impunity.

They called on the federal government to take urgent actions towards restoring the confidence of the South East in the security forces, and respectfully made an eight point demands.

They are urging the federal government to “convoke a security conclave; stop the bloodletting, adding: “No more killings, no more brutality, no more harassment and intimidation of “Our children”.

The women want the federal government to provide financial and social incentives to enable “our children” to start afresh; provide “our children” with a level playing field and stop favouritism.

They  are also asking the federal government to “embrace diversity and inclusion sincerely and thereby empower everyone with the possibility of achieving their fullest potential whether in the public or private sector, irrespective of tribe, creed or association.”

“As mothers we bear the brunt of avoidable loss of lives and property. We are broken and tired of burying our children. Therefore, we cry to the federal government to save our souls and let oeace reign in our land again. Ozo Emena (meaning Never again),” they said, adding: Igbo Lives matter!
The communique was signed by Obiageli Okeke, convener of the CIWI, Nkiru Ezeonyeka, Onyeka Onwenu, chief spokesperson of the group, representatives of five eastern states of  Anambra, Abia State, Imo, Enugu and Ebonyi.
– June 10, 2021 @ 8:53 GMT |