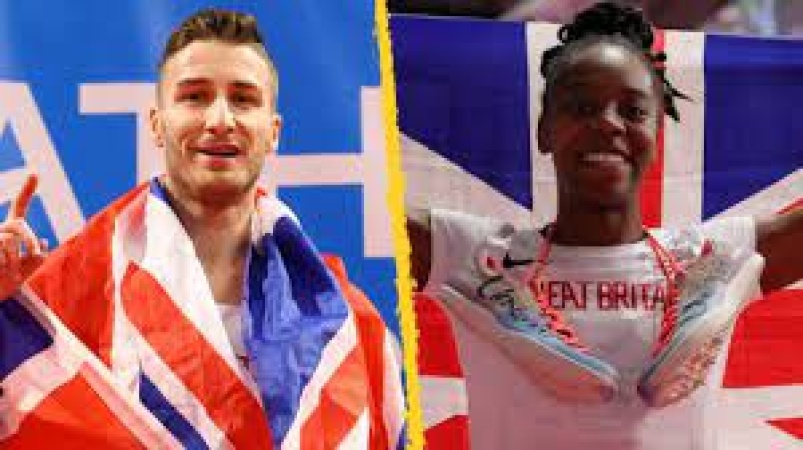 GREAT Britain’s Marc Scott and Lorraine Ugen both won bronze on the final day of competition at the World Athletics Indoor Championships in Belgrade.

Scott won Britain’s first medal of the championships in the men’s 3,000m with a time of seven minutes 42.02 seconds.

Ugen produced a season’s best leap of 6.82m to make the podium in the women’s long jump competition.

The 22-year-old US-born Swede had improved his world record with 6.19m in Belgrade earlier this month – and with a stunning final attempt he successfully cleared 6.20m to the delight of the crowd in Serbia.

It is a first medal at a major championships for European indoor 5,000m record holder Scott, 28, who produced a superb final lap in the 3,000m.

The Ethiopian pair, along with Kenya’s Daniel Simiu Ebenyo and Jacob Krop, pushed the pace throughout – but Scott timed his effort to perfection as he moved past Ebenyo on the final bend.

The Briton was left disappointed at last summer’s Olympics, failing to qualify from his 5,000m heat and finishing 14th in the 10,000m, but he is in fine form this year – taking 11 seconds off his own European indoor 5,000m record last month.

“Self-belief is one of those things that propels you through the sport. There’s no reason why I shouldn’t have self-belief,” Scott told BBC Sport.

“I have proven today that I deserve to be on the global stage. There are three big championships coming up and we’ll try and get more medals.

“The race was choppy but I was ready for whatever was going to be thrown at me. I know I’m very strong and I know I’m quick as well, and I displayed that over the last 200m.

“I knew it was a possibility today and I’m really glad to do it on a big stage.”

Serbia’s defending champion Ivana Vuleta, who won European indoor gold in Belgrade in 2017, once again triumphed on home soil to the delight of the crowd with 7.06m, as Nigeria’s Ese Brume recorded 6.85m to take silver.

“I’m really happy to get on the podium,” said Ugen. “It’s been a little while. I’ve suffered with injuries, I had to decide whether to retire or not, I didn’t have sponsorship.

“I made the decision to put the work in and prove to myself I can be at the elite level again.

She added: “I scared myself at the beginning with those two fouls and I was so happy to get that third round jump in and do enough to get on the podium.

“Secretly, I wanted a British record, but we’ll save that for outdoors.”

Hannah Williams, Ama Pipi, Yemi Mary John and Jessie Knight ran 3:29.82 to finish behind the United States, with Jamaica winning from the Netherlands and Poland in 3:28.40.

The men’s team of Ben Higgins, Alex Haydock-Wilson, Samuel Reardon and Guy Learmonth, in contention going into the final leg, clocked 3:08.30 as Belgium took the title in 3:06.52 – ahead of Spain and the Netherlands.

Yulimar Rojas became the first three-time world indoor triple jump champion as the Venezuelan set a new outright world record – both indoors and outdoors – to take the title in Serbia.

The 26-year-old, who is also the Olympic champion and two-time reigning world outdoor champion, produced a 15.74m leap on her final attempt.

Bekh-Romanchuk, who undertook a 20-hour car journey along with three of her Ukrainian team-mates to reach Serbia from their war-torn home country, embraced her coach after delivering a personal best 14.74m with her final jump – and she later finished sixth in the long jump competition.

In the men’s high jump, South Korea’s Woo Sanghyeok took gold with a clearance of 2.34m, finishing ahead of Switzerland’s Loic Gasch, in silver, and Italy’s Olympic champion Gianmarco Tamberi.

The 24-year-old Olympic 110m hurdles silver medallist maintained his eight-year unbeaten streak over the distance, winning in a time of 7.39 seconds after equalling his own world indoor record of 7.29 seconds in the semi-finals.

Britain’s Andrew Pozzi’s defence of his title ended in the semi-finals, the 29-year-old finishing fourth in his heat in 7.60secs, while compatriot David King had to endure an agonising wait for his fate to be decided.

A personal best run of 7.57secs left him tied with Japan’s Shusei Nomoto to a thousandth of a second for the last spot in the final, but in a bizarre tie-break situation it was King’s name that was drawn from a bag – the Briton placing sixth in 7.62secs.

“It’s been a rollercoaster,” said King. “First time that’s ever happened, apparently. I must be the luckiest guy in the world to get that. I was so happy to be in the final. It was crazy.”

With Britain’s Keely Hodgkinson absent after withdrawing from the competition on Saturday, Wilson raced clear to win in one minute 59.09, with Ethiopia’s Freweyni Hailu producing a strong finish for silver and Uganda’s Halimah Nakaayi holding on for bronze.