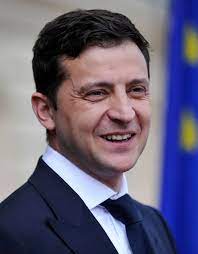 A Russian missile has hit a nuclear power plant in the south of Ukraine, according to President Volodymyr Zelensky in Kiev.

He accused Russia on Monday of endangering the whole world.

“We must stop it while it is not too late,’’ he wrote on social media.

The South Ukraine nuclear plant is located just under 300 kilometres south of the capital Kiev.

Three reactors with a net capacity of 2,850 megawatts were all in operation.

The Ukrainian state nuclear power plant operator, Enerhoatom, also reported a missile attack on the industrial site near the plant.

Three high-voltage power lines and a facility of the nearby hydroelectric power plant were damaged.

In the nuclear power plant building itself, more than 100 windows were destroyed by the blast wave.

The company published photos of a crater having four metres in diameter and two metres deep.

The shelling of facilities further east at the Russian-occupied Zaporizhzhya nuclear power plant over the past several weeks has raised international concern about a potential nuclear disaster.

The nuclear power plant in Southern Ukraine was under Ukrainian government control. (dpa/NAN)