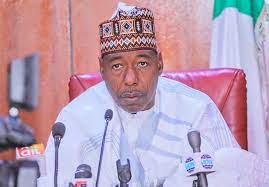 This is contained in a statement signed by the Senior Special Assistant to the governor, Baba-Sheik Haruna and issued in Abuja on Friday.

The governor’s action followed a peaceful protest launched by the people of Miringa on the governor’s convoy on Tuesday while on his way for a 3-day working visit to Biu LGA asking him to put the facility to use.

He said the governor who promised to act on the matter, immediately directed the Commissioner of Health to mobilize health workers as well as make it fully operational.

The governor then formally inaugurated the facility for the second time after its virtual inauguration by Chevron in October 2020.

Zulum also directed for the construction of staff quarters and perimeter fencing of the hospital for the comfort of the staff.

The medical centre was constructed and fully equipped by Chevron through a collaboration with Agbami Group.

The Chevron/Agbani group collaboration also provided a 100 KVA generator, a solar system, and water facilities to the centre.

Zulum thanked the two bodies for bringing healthcare service closer to the people promising that the facility will be put to full operation. (NAN)