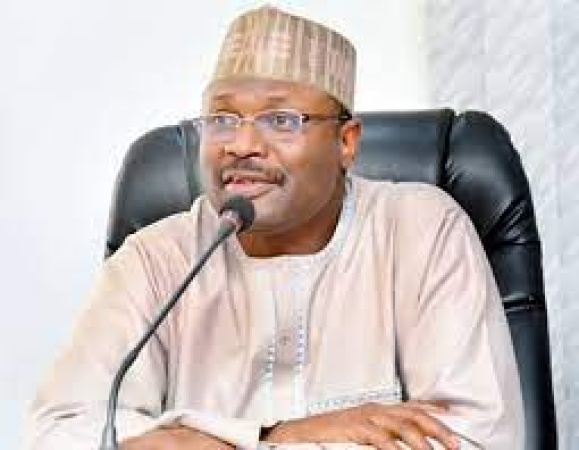 PROF. Mahmood Yakubu, chairman of the Independent National Electoral Commission, INEC, has reiterated that e-transmission of election results has come to stay in the country.

He made this statement on Wednesday promising that the results of the 2023 general elections would be transmitted electronically.

There have been calls by stakeholders that the deployment of technology in the country’s electoral processes be enhanced to address hitches witnessed in previous elections.

One of the key provisions of the law is the deployment of technology in the electoral process.

Section 52(2) of the Act says: “Subject to Section 63 of this bill, voting at an election and transmission of results under this bill shall be in accordance with the procedure determined by the commission (INEC), which may include electronic voting.”

Speaking on Wednesday in Abuja when he hosted a delegation of Media Trust Group (owners of Daily Trust newspapers and Trust TV) on election debate, the INEC boss said going forward, the electoral body would transmit election results electronically.

Media Trust Group is organising a series of debates for presidential and governorship candidates ahead of the next year’s general elections, dubbed ‘Media Trust Nigeria Election Debate 2023’.

Yakubu, told the delegation that the transmission of elections results from the polling units (PUs) would be a permanent feature in the nation’s electoral processes.

“Yes, it is going to be permanent in all elections conducted by the commission going forward. But I wish to draw your attention to the fact that we did not start the electronic transmission, at least, from the polling units to the IReV Portal, in Anambra or FCT elections.

“It was actually on August 2020 that we deployed that for the Nasarawa Central State Constituency by-election, the first election conducted under COVID-19. So, if you look at the IReV Portal, you could see all the results from the 2020 to the Ekiti and Osun governorship elections and all the other by-elections we conducted,” Yakubu said.

On lessons learnt from the just-concluded Kenyan presidential election, Yakubu said that the INEC had received a letter from the Independent Electoral and Boundaries Commission (IEBC) of Kenya that it wanted to deploy the Kenya Integration Election Management System (KIEMS) and that it was going to transmit polling unit level results to the collation centre. KIEMS is the equivalent of the Nigeria’s Bi-Modal Voter Accreditation System (BVAS).

He said like Nigeria, the transmitted results were collated manually.

He also noted that Nigeria’s BIVAS is a significant improvement on the Kenya’s system because in Nigeria, the collations have to pass through several stages from the polling units to the ward level, to the local governments and the states before reaching the national portal for the presidential election.

This, Yakubu said, allows agents of all political parties and candidates to observe the collation process at all stages, unlike in Kenya where results go straight to the national portal.

The INEC chairman also said that while Nigeria learnt from the 2017 Kenyan elections, the Kenyans had also learnt a lot from the conduct of the 2019 and 2023 general elections in Nigeria.

He said the collation of results was faster in Kenya possibly due to the fewer numbers of polling units and registered voters compared to the larger number of same in Nigeria.

He said the commission would conduct the elections pending when court cases and insecurity in some of the affected constituencies were resolved.

Speaking further, Yakubu said the INEC would support the Media Trust Group’s debates in order to deepen issue-based politicking ahead of the 2023 elections.

According to him, there are other debates and more expected to be conducted ahead of the 2023 elections.

He, however, said that the commission would be watching all the debates like other Nigerians.

Ibrahim had earlier said that the visit was to seek the support and participation of the INEC in the coming debates and other activities to promote and sustain issue-based politics and campaigns in Nigeria.

-With reports from Daily Trust