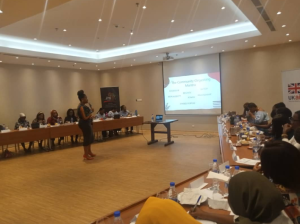 At the 2022 Community Organising Training

AHEAD of the 2023 general elections, Yiaga Africa says it has partnered UKAid to train no fewer than 40 young women in Lagos State as agents of change in their respective communities.

The Director of Programme, Yiaga Africa, Ms Cynthia Mbamalu, made this known during the 2022 Community Organising Training (COT) in Lagos on Wednesday.

The News Agency of Nigeria (NAN) reports that Yiaga Africa is a non-profit civic hub of change makers committed to the promotion of democratic governance, human rights and civic engagement.

The programme is also a four-day for 40 female community organisers and civic activists to build their capacity on how to effectively lead advocacy campaigns in their communities.

Mbamalu noted that the training was the second edition in the year to empower young women in the state, between the age of 18 to 30, on the need to increase young women participation towards the 2023 election.

She noted that for them to achieve this young leadership, there was need to build leadership capacity among the younger women and prepare them to take charge and ownership of the process.

Mbamalu said this was because young women play a vital role in the development of democracy in the country .

“The community organising training is under the Turn Up Project and the idea is to give life for this democracy. The programme is to also make this democracy a bit more efficient through participation of young women.

“We cannot talk about politics in the country without talking about Lagos because the state plays an important role in a lot of political space in the country.

“However, Lagos is still the state where we still have low voter’s turnout, low turnout of youths which serve as a heart of every civil protest and human right activism.

“This is why we should also begin to harness this potentials to increase participation of young people, especially young women as voters in the next election.

“This is the second we are having in Lagos. We have one some months ago, where we have some young men and women.  This one is design for women because we believe at Yiaga Africa that it is time for women leadership,” she said.

According to Mbamalu, among things that will be discussed are stories of past inspiring women, such as Late Mrs Funmilayo Ransome Kuti, Kajara Sawaba, Margret Ekpo, just to mention.

She said the selected participants were the young women who cared about change in their communities, who are young women and already in the political parties.

“We also have members of the political parities here, young women of civil societies organisation,” she said.

Mbamalu noted that the participants were drawn from 100 applications across the 20 local government areas in the state.

The Programme Manager for Governance and Development, Yiaga, Mr Ibrahim Farouk, said the programme intend to build community of young women who would be used to organise social change, especially toward the 2023 general elections.

He noted that the members  of the organisation just arrived from Sokoto where they also trained 40 women on how to become agents of change and community organisers.

Giving an instance, Farouk said that in Lagos State, there was huge voting population, but the voters population was not proportionate to the numbers of registered voters that the state had, hence the need for the training.

“So, one of the things that we want to change is to see how this young women that have gone through this training are able to engage their peers within their local government to bring about change.

“They will be trained on how to sensitise the youths in the collection of voter cards and the change in the turnout of young women toward the 2023 general elections,” he said.

Farouk said the organisation was coming up with a sensitisation programme on how to build the capacity of young candidates toward the 2023 election.

One of the participants, Ms Mary Okeje, said she felt happy to be part of the training, adding that it would empower her and others to train other young women in her communities.

According to her,  she looks forward to being trained, so she can go back to her community to train other people concerning political issues and how to turn up democracy.

Also, Miss Ify Rohama, said she was part of the programme as young women to get involved on how to acquire the knowledge needed for a community organising training.

“Just as the 2023 election draws nearer, there is need for the participation of youths to be involved. This is to get their voter cards and ensure that they show up on all the election days,” she said. (NAN)