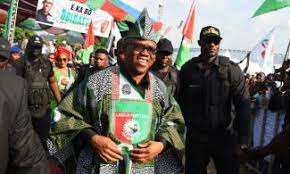 THE Movement for Election of Nigeria’s President of Igbo Extraction, has condemned the attack on convoys of the Labour Party’s presidential candidate, Mr Peter Obi, in Katsina State after successful electioneering campaigns.

The movement said this in a statement signed by its Convener, Mr Vincent Ezekwueme, and the Secretary, Prof. Justus Chidi, and made available to newsmen on Wednesday in Onitsha.

According to the statement, the act is barbaric, insensate, despicable and horrendous.

“It is very unfortunate and pathetic that this despicable incidence happened now that collective and collaborative efforts are channels towards ensuring peaceful, credible, free, fair polls in 2023.

“This election will foster national unity, integration and cohesion. We call on candidates, political parties, politicians and stakeholders not only to play the game of politics according to rules, but also to call their supporters to order.

“They should refrain from casting unnecessary and unsubstantiated aspersions on imagery and perceived opponents,” they said.

The organisation said that supporters should respect with dignity, views and interest of the opponents and embrace politics without bitterness and rancour.

They further appealed to the Katsina state government, Police and other security personnel to order for discreet and indepth investigation to unravel the circumstances surrounding the attack in order to forestall future occurrence. (NAN)