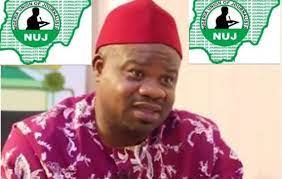 THE President of Nigeria Union of Journalists (NUJ), Mr Chris Isiguzo, has advised journalists to be professional in the discharge of their responsibilities.

Isiguzo gave the advice on Thursday in Abuja at a two-day workshop for journalists and civil society organisations in north central on the coverage of the 2023 general elections.

He said it was important the journalists exhibited the highest level of ethical standards before, during and after the elections.

He said it was imperative for journalists to guard against being used to spread fake news and other reports capable of threatening national peace and security.

“While we concede that it is inevitable to eliminate crises and conflicts from our society, it is important to make deliberate efforts toward conflict resolution and peace building through our conducts as journalists.

“Media professionals should brace up to the challenges ahead, especially since they are expected to participate in the process of social reconstruction and democratisation.

“While discharging their duties journalists should not deviate from the ethics of the profession because this will not auger well for the nation,” he said.

Mr Damian Ihekoronye, Grant and Partnership Manager, CDD, said the workshop aimed at equipping the participants with the necessary knowledge on identifying and countering fake news.

“We have different conflicts going on across the geo – political zones. As we approach the elections there is need for journalists to report events accurately,” he said.

He urged journalists not to report things that would lead to crisis but ensure that their reportage will contribute credible to election.

In his goodwill message, the chairman, NUJ, FCT Council, Mr Emmanuel Ogbeche, called on the journalists to always cross check their information before publishing. (NAN)