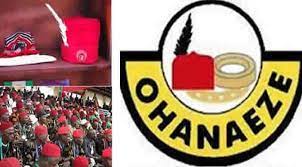 THE Abia chapter of Ohaneze Ndigbo has nominated at least 24 eminent sons and daughters of Igbo origin for its 2022 honour’s awards.

The Chairman of the Local Organising Committee of the event, Chief Charles Amah, reeled out the names at a news briefing in Umuahia on Thursday.

Amah said that the list comprised personalities that had distinguished themselves in different fields of human endeavour within and outside the shores of the country.

He said that posthumous awards would also be given to late Deputy Governor of Abia, Dr Chima Nwafor, Sen. Uche Chukwumerije and a foremost traditional ruler, Eze Bernard Enweremadu, amongst others.

“These are men and women who have helped to lift the image of the Igbo mation with their superlative achievements in local and global arena.

“It cannot be disputed that they are accomplished in all spheres of life and have contributed to the emancipation of Igboland,” he said.

Amah, who was flanked at the briefing by members of the new state executive of the group, said that the awardees were selected from the seven Igbo-speaking states.

These, he said, include the five South-East states, plus Delta and Rivers.

He said that all the necessary arrangements had been put in place to make the event hitchfree and memorable.

“Although Abia ranks as one of the safest states in the federation, yet adequate arrangements had been made for security of lives and property,” he said.

Amah said that other highlights of the event, slated for Tuesday,  Nov. 29, included the inauguration of the new executive, led by the state President, Chief Okey Nwankwo, for a four-year single term.

He said that the ceremony would be chaired by Retired Deputy Inspector-General of Police, Azubuko Uda, while Ikpeazu, a prospective awardee, would be the Special Guest of Honour.

He also said that the President-General and Secretary-General, Ohaneze Ndigbo Worldwide, Amb. George Obiozor and Amb. Okey Emuchey, would be Guest of Honour and Co-host, respectively, at the event.

Fielding questions from newsmen, Amah said that the apex socio-cultural Igbo organisation strongly supports the rotation of power at the centre.

“If the North, South-West and South-South have had their turns, it means the South-East should produce the next president.

“This is the only way to promote equity, fairness and justice in the country,” Amah said.

According to him, appropriate sanctions should be meted to members of the organisation dragging the image of the Igbo nationality in the mud. (NAN)