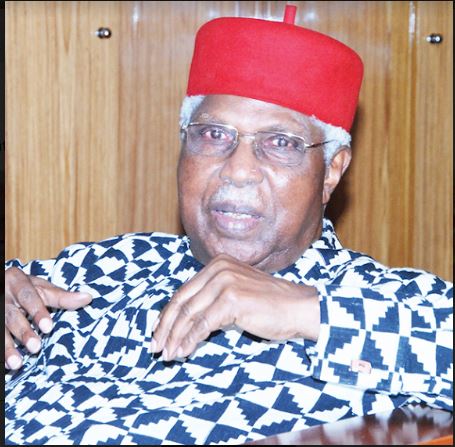 It is that time again when Nigerians either cogitate or ruminate and even agonise over this land of our forebears. February 2023 general elections hold great significance in several areas. It will either be a paradigm shift or a stiffening of the status quo. It is thus appropriate to read a book that addresses the question of the moment: Whither Nigeria?

Alex Ekwueme’s (2002), Whither Nigeria: Thoughts on Democracy, Politics, and the Constitution, contains 22 essays that represent far-reaching insights and thoughts on politics and public policy in Nigeria. Reading it is like hearing a voice from the beyond with all the wisdom of the ages. The twenty-two essays in this book cover a broad range of issues and the years 1992-2000. They communicate that Ekwueme made critical and significant contributions to the birthing of the Fourth Republic.

Dr. Alex Ekwueme is eminently qualified in theory and practice to speak on these topics. The erudite gentleman bagged six degrees, including two doctorates in his lifetime. He had a broad cosmopolitan worldview and saw provision and privation. He was the first elected Vice-President of Nigeria in the Second Republic.

The military government of General Muhammadu Buhari detained Ekwueme for six years after they overthrew the Shehu Shagari-Alex Ekwueme government. They found nothing on him, yet kept him, as second-in-command in jail while Shehu Shagari, captain of the team, enjoyed house arrest!

“During the incarceration, I had plenty of time on my hands. I was very much worried about Nigeria and her future. I considered the situation where elected civilian governments could be sacked at will by the military to be unsatisfactory and unacceptable. I concluded that military intervention could only be stopped if we put in place a form or structure that would ensure the involvement of representative Nigerians from all geopolitical zones of the country at the highest level of national governance”, Ekwueme states as background.

The essays in this book include ‘More than a Government of National Consensus’, ‘Restructuring the Nigerian Polity’, ‘Political Fair Play and National Reconciliation’, ‘Some Thoughts on the Crisis in Nigerian Education’, and ‘Facilitating Women’s Participation in Nigeria’s Political Structure’.

Other subjects, all still pertinent and present, include ‘The Changing Face of Nigerian Federalism: Which Way Forward?’, ‘Religion and Politics in Nigeria’, ‘Nigeria’s Federal Constitutions and the Search for “Unity in Diversity”, and ‘Democratization of the Nigerian Polity’.

In “More than a government of National Consensus”, Ekwueme states his credentials. “Having put my life at possible risk at Bonny Camp, Kirikiri, and Ikoyi prisons, I consider that I have as much stake as any other Nigerian in the unity, indivisibility, stability, and survival of this country and that I am not altogether ill-qualified to pass on a few words of advice. I will consider my duty done if I proffer the advice; the burden will then be our collective if we fail to consider the words of advice properly’.

Ekwueme performs a momentous duty of sharing his advice of many years herein. The former Vice President itemizes the critical issues requiring resolution in Nigeria to include:  (i) the national question, (ii) the federal structure of Nigeria, (iii) the local government structure, (iv) the economic situation, (v) the military question, (vi) the political question and the rigidity of the constitution and (vii) conciliar federal executive and the doctrine of collegiality.

He proposed “a conciliar Presidency made up of a President and six Vice-Presidents chosen, one from each of the six regions of the country” to “operate as a council based on collegiality and true consensus”. The President would directly supervise the Ministry of Defence, Police Affairs, and the State Security Services, while the Vice Presidents would supervise ministries and departments grouped in some order.

Similar bold and “strange” (his words) proposals fill the pages of this book. Ekwueme suggested the six regions grouping of Nigeria that has now become part of the country’s structure. Will his suggestion of a conciliar system someday come to pass? Conciliar means “relating to or proceeding from a council” and originated in ecclesiastical tradition.

In “Restructuring the Nigerian Polity”, first presented on March 21, 1994, Ekwueme suggested, among others: “Reconstituting Nigeria into a true federation of six regions with five national cities”, and “allocation of a larger share of national revenue to the oil-producing states/regions”. The second is now in place with the 13% derivation to oil-producing states!

Restructuring features consistently in most of the submissions. The former VP was candid. Chapter 3 (pages 23-59) is a primer focusing on Nigeria’s political structure and all the contending ideas around federalism, confederalism, unitary government, and presidential and parliamentary systems. He recounts on page 29 the long history of attempted secession and the actual secession that Nigeria crushed.

The economy features serially in the contributions of Dr. Ekwueme. He spoke prophetically on the economy, reading him retrospectively. In “Whither Nigeria”, the title essay he submitted on February 5, 1992: “There appears to be no short answer to Nigeria’s economic problems, and while not attempting to apportion blame for a situation in which three decades of post-independence governments (civilian-military) and the Nigerian citizens themselves have contributed to creating, the truth remains that, in terms of living standards most Nigerians are certainly worse off today than they were a decade ago. Nigeria’s external debt has almost doubled within the same period. The middle class has ceased to exist as a reasonably comfortable, forward-looking stabilising stratum of society. This situation cannot augur well for stability or probity in any country. The years ahead promise to be even tougher, and all hands will need to be on deck to salvage the situation.”

Ekwueme led the G-34 following his bold letters to then Head of State General Sani Abacha, contesting some of the postulations of that government when Abacha’s word was the holy grail. Whither Nigeria captures the developments.

There is a feeling of déjà vu reading Whither Nigeria. Some sections say Nigeria has been revolving in one position in motion without movement. Take education. “Some Thoughts on the Crisis in Nigerian Education”, written in 1996, could also speak to today. Strikes by the Academic Staff Union of Universities, Academic Staff Union of Polytechnics and the Non-Academic Staff Union in Universities shut down the nation’s tertiary institutions for two years. The Shagari-Ekwueme government negotiated and implemented the first University Salary Structure; provided N500 million (equivalent to US$800 million) for the then 14 federal universities; while naira devaluation over the years negated all the benefits as did a massive increase in the number of universities and other national institutions.

Ekwueme, GCON,  took the road less travelled in recommending tuition fees in higher education. “Government should concentrate on providing grants for capital development of universities and other tertiary institutions.” Quantify recurrent costs, deduct income the institutions generate, and divide the net costs by the number of students. “Supposing the total recurrent costs of the universities come to N22 billion, and they can generate N2 billion leaving a shortfall of N20 billion; if there are 400,000 university students in Nigeria, the tuition fees will come to N50,000 per annum. We can refine this approach further to provide differentiated tuition fees for various fields of study”.

Ekwueme’s other book on politics is From State House to Kirikiri, which recollects his journey from a palace to prison following the military putsch. Google and Amazon list the books but indicate they are unavailable. Gladly, to mark his 90th posthumous birthday, the Ekwueme family has promised to reprint his seminal books for distribution and easy accessibility. As friends and family celebrate the legacies of Ekwueme, the statesman, they should also consider making them e-books for broader distribution. Whither Nigeria is a must-read for citizens and particularly political actors of today.