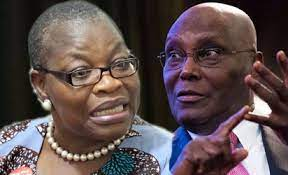 OBY Ezekwesili, a former Minister of Solid Minerals and Minister of Education has on Tuesday said that Atiku Abubakar, the presidential candidate of the Peoples Democratic Party in the fort coming general election was never the head of the Economic Management Team.

Ezekwesili made the statement on her official Twitter handle @obyezeks while responding to another tweet made by Atiku on Monday.

Atiku had suggested on his official Twitter handle @atiku that as the Vice president of the federal republic of Nigeria, he was the head of the economic management team and was instrumental in designing a private sector revival strategy and advocated for the opening of the economy for private sector investments in several sectors.

In the tweet, Atiku said : “As head of the economic management team while I was Vice President, I was instrumental in designing a private sector revival strategy and advocated for the opening of the economy for private sector investments in several sectors. And we made tremendous progress. #AtikuAtNESG

Responding, Ezekwesili twitted: “Dear former Vice President Atiku, please ask the handlers of your @Twitter account to stop misleading the public. You were never the Head of the Economic Management Team.

“This absurd Lie does you no good at all. Please ask your Team to stop it.

Ezekwesili’s response has so far elicited several reactions from Nigerians on twitter, some, in support of her statement, and others against it.

Many have argued that part of the responsibilities of the vice president of the country is to head the Economic Management Team.

Replying to @obyezeks, @chosensomto said, “It is the words of Oby vs the constitution of the Federal republic of Nigeria that makes the VP the head of the economic team.

“Guess which one they will believe on twitter? Lol.

“Echo chamber, and some people have learned how to play the mob.”

Following the same thread, @Cynthia_Ugo2 said, “I think you are the one that need more clarification. National Economic Council is different from Economic Management Team.

“The Economic Council comprises of Governors etc. But the later does not.”

Realnews reports that Atiku Abubakar, was the Vice president of Nigeria from 1999-2007 under the regime of President Olusegun Obasanjo.

However, the Economic Management Team was set up by Obasanjo in 2003 and is different from the Economic Advisory Council established by the 1999 constitution.

The Economic Management Team during this period was headed by Ngozi Okonjo-Iweala, the current Director General of the World Trade Organization, WTO.