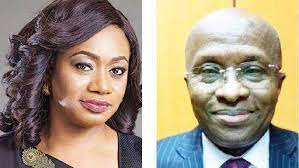 Ahmad and Adamu were first appointed as CBN deputy governors in charge of the Financial System Stability and Corporate Services Directorate respectively in March 2018.

President Buhari, in a letter, addressed to the Senate President Ahmad Lawan and read during Tuesday’s plenary, asked the Red Chamber to confirm their nominations in the “usual expeditious manner.”

As Deputy Governor in charge of Financial System Stability, she is responsible for leading the effort to promote a sound financial system in Nigeria; one of the principal objects of the bank as specified within the CBN Act.

In this role, Aishah is a member of the Governing Board and Committee of Governors at the CBN and Chairman, of the Financial Institutions Training Centre (FITC) – a not-for-profit organization offering training, consulting and research services for the financial services sector.

Before her appointment at the CBN, Aishah was Executive Director, Retail Banking at Diamond Bank PLC, with over 22 years of experience as a corporate executive and finance expert.

Mr Adamu began his career in the Unified Public Service (UPS) in 1983 with the Bauchi State Civil Service.

He spent thirty-five (35) years in the UPS, twenty-five (25) of which was spent in the Central Bank of Nigeria (CBN).

During his years in the Central Bank, he was seconded to the Gombe State Civil Service from 2008 to 2010 as the Senior Special Assistant and Head, Procurement Management and Due Process Office.

He returned to the CBN in 2010 and was appointed Director of the Strategy Management Department in 2012, after a selection process.

He was later deployed to the Human Resources Department of the Bank in 2016 as Director, a position he held until his retirement from the services of the Bank on 14th February 2018.