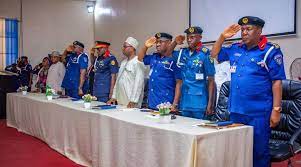 THE Nigeria Security and Civil Defence Corps Delta State Command in line with the directive of the Commandant General of the Nigeria Security and Civil Defence Corps, Abubakar Audi Ahmed, joined the rest of the World to mark this year 2022 International World Peace Day, with the theme: Effective Leadership and Economic Empowerment. The Solution To End Racism, Electoral Violence, Farmers/Herders Conflict And Peace Building”

Declaring the one-day summit open was the State Commandant of the Nigeria Security and Civil Defence Corps Delta State Command, Akinsanya Iskilu Abiodun, who welcomed guests and participants to the peace summit being organized by the Delta State NSCDC in partnership with the Delta State Government and the Sceptre Leadership International.

The guest lecturer, Jeff Chisunum, from the University of Delta, Agbor, Delta State in his lecture, said that the United Nations General Assembly in 1981 passed the international world peace day to be celebrated annually on the 21st day of September every year as a day of non-violence day, cessation of hostilities, strengthening the ideals of peace and to observe 24 hours of ceasefire.

According to the statement by Emeka Peters Okwechime, Public Relations Officer, NSCDC Delta, the event was largely attended by people from all works of life, including sister security agencies, the Nigeria Police Force, the Correctional Service, the FRSC, NDLEA among others.

On the forthcoming general election, the state Resident Electoral Commissioner Rev Monday Udoh Tom, stated that there is no cause for alarm, panic or apprehension. He assured Deltans that the 2023 would be free, fair and credible and used the opportunity to call on Deltans to remember to collect their PVC to avoid rush on the long run