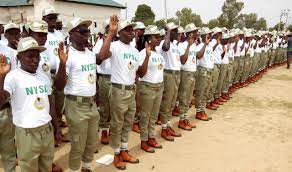 The DG gave the advice while addressing the 2022 batch “B’’ stream II corps members at the formal closing and passing out ceremony at the permanent orientation camp, Mangu.

Fadah was represented by the NYSC State Coordinator in Plateau, Mrs Rifikatu Daniel.

He also urged the corps members to integrate into their host communities and undertake community development projects that would uplift the living standard of the people.

Fadah enjoined the corps members to perform their duties with diligence and be guided by the provisions of the NYSC Act and Bye-laws as well as their workplace rules and regulations.

The Director-General called on the corps members to sustain the spirit of patriotism, hard work and resilience, which they imbibed during the orientation course.

He further called on them to strive to meet the expectations of Nigerians by contributing towards the progress and development of the nation.

Fadah challenged the corps members to build on the skills acquired on camp via the Skills Acquisition and Entrepreneurship Development programme (SAED) by availing themselves for the post camp training.

He added that the act would enable them to become proficient in a particular skill during and after their service year.

Fadah urged the corps members to be security conscious at all times and avoid putting themselves in harm.

He cautioned them against staying out late at night, attending night parties and accepting car rides from strangers.

The DG warned them against the use of social media for ethnic jingoism, rumour peddling.

Fadah also enjoined them to use the platform for promoting peace, unity and prosperity of the nation.

Fadah cautioned the youth corps members against engaging in local politics, saying, ”it is a no-go area.”

He called on them to be good ambassadors of the scheme and to be wary of acts that could tarnish the image of the NYSC.

The NYSC boss advised corps members to take the COVID-19 vaccines as the vaccines would keep them safe against the virus.

Fadah also urged them to ensure that they adhered to the COVID-19 safety protocols.

Fadah appealed to the corps employers to always accept corps members posted to them and make the necessary provisions for their welfare.

The News Agency of Nigeria (NAN) reports that awards were presented to corps members and staffers for outstanding performances in camp.