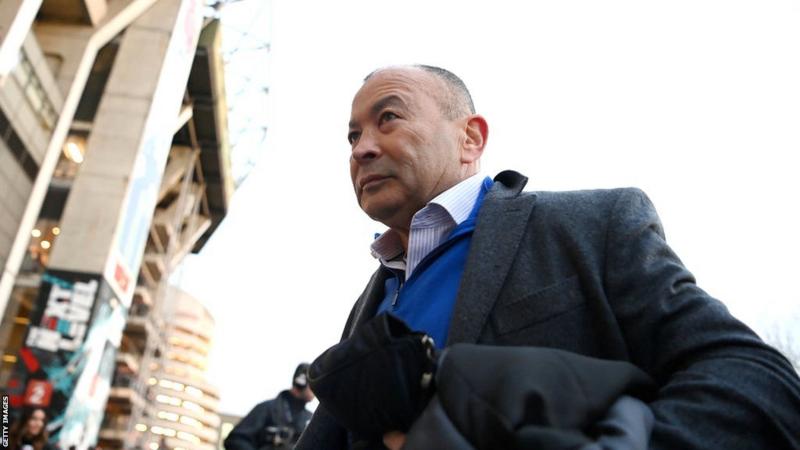 Jones won his first 17 Tests in charge of England

ENGLAND have sacked Eddie Jones, leaving the team without a head coach nine months before the Rugby World Cup.

Forwards coach Richard Cockerill will take over the running of the team on an interim basis.

Jones departs after a dismal year of results, with only five wins from 12 Tests in 2022.

The 62-year-old won three Six Nations titles in his seven years in charge and led the team to the 2019 World Cup final, which they lost to South Africa.

“I am pleased with much that we have achieved as an England team and I look forward to watching the team’s performance in the future,” said the Australian.

“Many of the players and I will no doubt keep in touch and I wish them all well in their future careers.”

“He has the highest win ratio of any previous England head coach and has helped develop the leadership skills of many players and coaches,” said Sweeney.

“I am grateful to Eddie for all he has done for England across many areas of the game and the professional way in which he has approached reviewing the performance of the team.

“He has provided the panel with astute insight and meaningful lessons that will support the team performance going forward.”

The RFU said it “will now conclude the long-term work it has been undertaking on coach succession planning” with a full-time appointment “set to be announced in the near future”.

England’s next fixture is home to Scotland in the opening round of the 2023 Six Nations on 4 February. The World Cup, hosted by France, starts in September.

Borthwick among the contenders to take over

While the RFU initially hoped an English coach would succeed Jones, chief executive Bill Sweeney said earlier this month that another overseas coach is a possibility.

However, former Ireland fly-half Ronan O’Gara – head coach of French side La Rochelle – ruled himself out of the running, while Warren Gatland, who has led the British and Irish Lions on their past three tours, returned to Wales on Monday.

Leicester’s Steve Borthwick, who served as England forwards coach under Jones between 2016 and 2019, is the leading domestic contender, with Sale’s Alex Sanderson an outside option.

Jones took charge of England after a pool-stage exit from their home World Cup in 2015, and the team won his first 17 matches in charge.

That run included a Grand Slam in his first Six Nations campaign, a successful title defence and a first series whitewash of the Wallabies in Australia.

His team upset two-time defending champions New Zealand in the 2019 World Cup semi-final, but were overwhelmed by a powerful South Africa performance in the final.

Jones’ hopes of leading England to a second World Cup have been dashed by a poor run of form.

England won only one match – a comfortable victory over Japan – from four Tests in the autumn and were booed by some fans after their final defeat by South Africa.

The RFU began a review a day later, saying results “were not where we expect them to be”.

However, Jones leaves his England post with a better Test win percentage – 73% – than any of his predecessors.

Eddie Jones arrived at Twickenham at the end of 2015 to much fanfare – England’s first foreign coach, with a proven track record at international level and a brief to return English rugby to the game’s top table.

His regime started magnificently with 17 straight wins and two Six Nations titles, and in 2019 Jones almost completed the remarkable turnaround as his side lost in the World Cup final, with the semi-final demolition of New Zealand arguably England’s greatest performance.

But England have struggled since that night in Yokohama, and despite much talk of transition and development the results this year are of a team in stagnation or even regression; an obsession with the World Cup from coach and Union coming at a cost.

While Richard Cockerill will take over on an interim basis, Leicester’s Steve Borthwick is expected to be the RFU’s long-term choice to replace Jones.