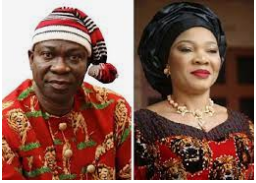 ON Friday last week, a delegation of the Nigerian Senate left Nigeria for the United Kingdom. Their only agenda is to see how they can lobby members of the UK parliament and those high up in the government of Mr Boris Johnson, the UK Prime Minister, in getting a soft landing for one of their own, former Deputy Senate President, Ike Ekweremadu and his wife, Beatrice, who are presently languishing behind bars for alleged organ harvesting in the United Kingdom.

Aside from the lobbying by pressing the right connections in the UK, the delegation, even before they left Nigeria, had secured the service of a senior lawyer in the UK to work at getting Ekweremadu and his wife out to the logjam they found themselves.  The couple was arrested and arraigned before a United Kingdom (UK) court over allegations of organ harvesting of one David Ukpo Nwamini, said to be a minor.

According to the UK laws, the politician and his spouse could be prosecuted for slavery, servitude or compulsory labour; as well as the exploitation of a child under their care as entrenched under the United Kingdom’s Modern Slavery Act 2015. The politician and his wife have been arraigned at Uxbridge Magistrate’s Court but denied bail. The UK law is very clear and unambiguous when it comes to organ trafficking, particularly when it involves a minor or if it is perceived to be done for monetary consideration. The Act 2015 frowns at human trafficking under which organ harvesting falls, and is punishable with a maximum sentence of life imprisonment upon conviction.

The Act partly reads, “Under S. 2, an individual commits an offence if they arrange or facilitate the travel of another with a view to that person being exploited. It is irrelevant whether that person consents to the travel, or whether they are a child or an adult.

“Under S. 3 of MSA 2015, exploitation includes: slavery, servitude and forced or compulsory labour; sexual exploitation (which involves the commission of an offence under s 1(1)(a) of the Protection of Children’s Act 1978 (indecent photographs of children), or Pt 1 of SOA 2003 (e.g rape or sexual assault); removal of organs where a person is encouraged, required or expected to do anything which involves the commission of an offence under ss 32 or 33 of the Human Tissue Act 2004 (prohibition of commercial dealings in organs and restrictions on use of live donors); securing services etc by force, threats or deception; securing services etc from children and vulnerable persons (eg, physically or mentally ill or disabled).” It further states that anyone found guilty of “human trafficking is liable on summary conviction to 12 months imprisonment and/or an unlimited fine,” adding that “on conviction on indictment, the maximum sentence is life imprisonment.”

Ekweremadu’s travails, unknowingly, began even before he left Nigeria. He had written a letter to the British High Commission in Nigeria in support of Mr David’s visa application. In the letter, he said, “I am writing in support of the visa application made by Mr Ukpo Nwamini David, who is currently having medical investigations for a kidney donation to Ms. Sonia Ekweremadu. David and Sonia will be at the Royal Free Hospital, London, and I will be providing the necessary funding. I have endorsed a statement of my bank account. Please do not hesitate to contact me if you require additional information.”

When David arrived in London in February 2022 for medical investigations, it was discovered that his kidney did not match that of Sonia. He was to return to Nigeria in May 2022. On his departure date, he allegedly told the police at the airport that he was 15 years old, a Lagos-based homeless person trafficked to the United Kingdom by Ekweremadu and his wife. David was promptly put in protective custody. His claim that he was a minor was enough.

The Court will have to determine whether David is 15 or 21 as claimed in his international passport. But one thing that is very clear is the fact that David, within his three-month stay in London, having tasted the good life, no longer wants to return to Nigeria. He must have felt that the best route for him is to blow the whistle on the Ekweremadus. Doing exactly that, he was promptly taken into protective custody and a red alert was sent to all UK entry and exit points for the arrest of the Ekweremadus. It was while they were on their way to Turkey to possibly search for another organ donor for their daughter that they were nabbed and are being charged under the UK Modern Slavery Act 2015.

Organ trade, aka Red Market, is quite common today in many countries of the world because human beings are not perfect. They are afflicted by all kinds of ailments and if affected parts can be replaced, they go for it. There are three types of transplantation namely: illegal, forced or compensated transplantation. Kidney transplant is the most common all over the world. Every human being has two kidneys and can conveniently survive with one if medical procedures are done properly without any complications. Some patients receive kidneys from dead people who are called deceased donors. Others receive them from living donors such as friends or family members. The most suitable donor is usually a sister, brother, mother, father, daughter or son.

Donations from family members are hugely compatible but the best donor is said to be an identical twin. In all of these two issues are paramount (a) there must be compatibility between donor and receiver (b) there must not be a transmissible disease from the donor.

However, even though there is a growing number of people having problems with their kidneys, the supply is relatively small. It is estimated that in Western Europe alone, 40, 000 people are awaiting a kidney transplant. As at January 2020, more than 100, 000 candidates were waiting for organ transplants in the United States alone. Most of those who donate their organs are young and poor people who think they can improve their lives with the compensation paid to them. Therefore, there is a growth in this illegal trade considered a money-spinner. It is estimated that it generates profits of between $600 million and $1.2 billion per year. In Africa, the trade is flourishing in three countries namely, Angola, Libya and South Africa.

However, in 1987, the World Health Organisation (WHO), declared organ trade illegal, saying that such a trade violates the Universal Declaration of Human Rights; that it is “likely to take unfair advantage of the poorest and most vulnerable groups; that it undermines altruistic donation and leads to profiteering and human trafficking.” In 1991 at the 44th World Health Assembly, WHO, approved nine guiding principles for a human organ transplant. The principles clearly stated that organs cannot be the subject of financial transactions. Despite this pronouncement by WHO, illicit organ trade is on the increase in many countries especially the selling and buying of kidneys.

This is so because kidney transplant is the most commonly conducted transplant surgery worldwide today. The United States is the leading kidney transplant country with more than 40 per cent share of the market in 2015, Brazil with 10 per cent, while UK, France and Mexico take third, fourth and fifth positions respectively.

It is in this logjam that the Ekweremadus have found themselves. Their intention was to search for a young man to donate one of his kidneys to their daughter, Sonia, who is presently having issues with her kidneys.

But Ekeremadu will not go down without a fight. And the race is on to get them off the hook. His kinsmen in Enugu State, his colleagues in the Upper chamber, and the Federal Government are currently involved in getting a soft landing for him and his wife. I do not have anything against such a move. My grouse is that would the Nigerian Senate accord such a treatment to a lesser-known Nigerian in the claw of the British law? I doubt if such would have been done.

Aside from that, many Nigerians hold the like of Ekweremadu responsible for the sorry state of most of our infrastructures, particularly in the health sector. For the record, Ekweremadu has been in government since the return of the current democratic dispensation in 1999. He has been part of the greedy elites that are in power for their own benefits and those close to them. They get to power and forget the masses that voted for them. They make sure that they steal enough money that would last their entire generation for life forgetting that there is a superior being watching over the affairs of everybody.

With the wealth God has given this country, there is no reason why we cannot have six world-class hospitals in Nigeria today. Many of the Doctors who take care of Sonia and other rich Nigerians outside the shores of the country are Nigerians who have been forced to abandon ship when the going got tough at home. Many of the top-rated surgeons in the USA and the United Kingdom are Nigerians, trained here in Nigeria before seeking greener pastures outside the country.

If Nigeria has been treated right by our leaders, there wouldn’t have been the need for the Ekweremadus to source for organ donor and transport such to the UK in their bid to save their daughter’s life. It is time for those in the corridor of power to start thinking and acting right in their own interest and in the interest of all by curbing their excessive corruption and making sure that they put necessary infrastructures in place back at home. If Nigeria develops, it will be to the glory of us all and the pride of black men and women all over the World. I wish Ekweremadu well in his present travails.

See you next week.