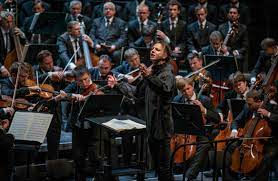 THE Russian ensemble, musicAeterna, is to perform in the German city of Dortmund on Friday without members who have expressed support for the Russian invasion of Ukraine.

The artistic director of Konzerthaus Dortmund said this on Thursday.

The suspensions had been agreed with Teodor Currentzis, the ensemble’s founder and director, and there was complete agreement on the decision, he said.

However,Von Hoensbroech emphasised that artists should not be excluded merely for the fact of being Russian.

The classical music magazine Crescendo had earlier reported the decision.

Four ensemble members made anti-Western comments via social media, among them a tenor who published a song offering support to Russian soldiers at the front that has the phrase “fascism coming down on us again.’’

Another member posted a video showing him turning the heating up in his accommodation with the aim of harming the German economy amid a gas shortage caused by Russia’s decision to suspend supplies.

Von Hoensbroech said there had been agreement on the need to act severely. “The tragic thing about it is actually that Russian propaganda clearly works,’’ he said. (dpa/NAN)