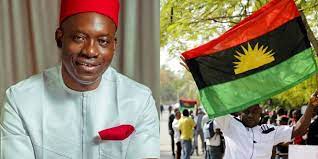 Soludo and the IPOB

THE Indigenous People of Biafra (IPOB) has alleged that the Anambra state governor, Professor Charles Soludo is plotting to disturb the peace that has existed in his state.

The separatist group said this on Wednesday as it accused Soludo of arresting and killing its members and other innocent citizens through the state-sponsored security operatives.

IPOB in a statement by its media and publicity secretary, Emma Powerful, also said the governor is secretly using the state security outfit, Ebubeagu to attack residents of the state.

Vanguard reported on Monday that the former governor of the Central Bank of Nigeria (CBN) declared that gunmen arrested by security operatives in the state are all Nigerians of Igbo extraction.

Reacting, IPOB said, “The attention of the Indigenous People of Biafra (IPOB) under the leadership of Mazi Nnamdi Kanu has been drawn to the reckless and unjustifiable murder of innocent citizens of Biafra in Anambra State by the secret militia and Ebubeagu security outfit created in Anambra State by Prof. Charles Chukwuma Soludo.

“It is clear that the governor wants to turn the peaceful state of Anambra into flame and nobody should blame IPOB because we contributed more than 80% of the peaceful environment.”

The group then said, “Soludo must be held responsible for whatever happens in Anambra State going forward if he continues to use his Ebubeagu militia to be profiling Biafrans and eliminating them because they have paintings or tattoos on their body.

“IPOB want to advise Soludo to ask those governors in the south Eastern States especially Imo and Ebonyi States what is happening in their States because they refused to heed to the genuine advice proffered to them by IPOB against setting up this Ebubeagu security outfit.

Soludo should be informed that IPOB does not compromise when it comes to our agitation for freedom and the well-being and security of Biafrans. We shall definitely act to protect our people and our land.”