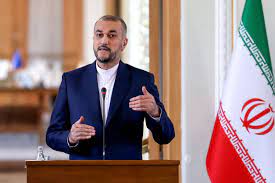 Iranian Foreign Minister Hossein Amir-Abdollahian disclosed this on Tuesday at a meeting with his Lebanese counterpart Abdallah Bou Habib on the sidelines of the 77th session of the United Nations (UN) General Assembly in New York.

During the meeting, the two sides exchanged views on important regional and global issues and discussed bilateral relations, according to the report.

Iran’s foreign minister stressed his country’s readiness to supply oil and other aid to Lebanon to overcome the problems it was facing, according to the report.

Over the past months, the Iranian ambassador to Lebanon Mojtaba Amani has repeatedly said his country was ready to provide Lebanon with fuel commodities.