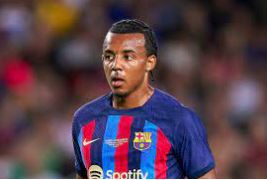 The France international had looked set to sign for Chelsea during the most recent transfer window, only to put pen to paper on a five-year deal at Camp Nou.

Sevilla director of football Monchi suggested at the time that Barca went for Kounde after Chelsea had withdrawn their offer due to “having doubts.”

However, Kounde has insisted the decision was his own after being wooed by Barca head coach Xavi.

“First, I have come to a huge club, which has known good times and which, lately, has had less,” he said.

“I come to a project that I will not call reconstruction, because we already have a competitive team, but rather, being upturned.

“I was interested in being part of this new wave, in search of titles, and to put Barca back where it has always been, among the best clubs.

“Then there was the conversation with the coach. We talked about football. I felt a real confidence from him, that he had a real knowledge of myself, my game and my qualities.

“I spoke with Tuchel and I also felt that he wanted me to come, but I simply preferred Xavi’s speech.”

Chelsea have made a slow start to the 2022/2023 season and recently brought an end to Tuchel’s 20-month tenure.

In spite of their high-profile financial issues, meanwhile, Barca have made a strong start to their campaign and are two points off LaLiga leaders Real Madrid after six matches.

Kounde was registered by FC Barcelona at the end of August, a month after joining, and has helped the Catalan giants to four clean sheets in his five appearances.

Indeed, the five clean sheets Barca have kept in their opening six league matches is a tally they did not reach until 21 games played last season.

And Kounde, one of two defenders alongside team-mate Alejandro Balde to have provided two assists in a single LaLiga match this term, believes he is well suited to Xavi’s style.

“When I talked to Xavi he told me that my qualities correspond to his game plan, starting from the back, playing high, using my qualities of speed and anticipation,” Kounde said.

“He also wants an aggressive team —- we are one of the teams that presses high.

“He saw me in this system and I too saw myself in this team that I saw make a pretty crazy rise in the table last season.

“With Sevilla we were 15 points ahead of them in the middle of the season. Xavi arrived and I saw the changes he made and what direction he was going in. I liked it.”(dpa/NAN)