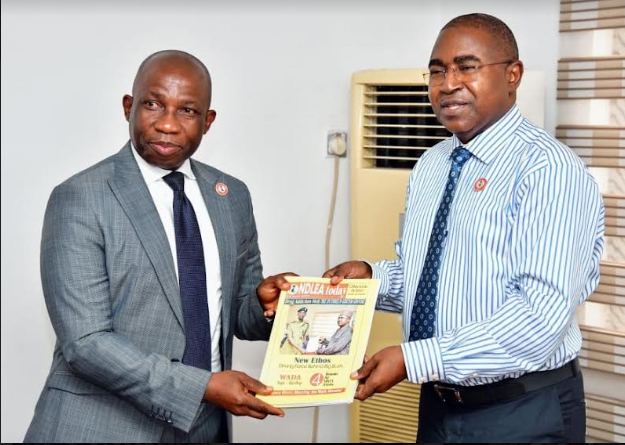 THE National Drug Law Enforcement Agency, NDLEA, and the Nigerian Copyright Commission, NCC, have renewed their partnership in the fight against organised crimes, including drug trafficking and copyright piracy across the country.

Chairman and Chief Executive of NDLEA, Brig. Gen. Mohammed Buba Marwa (Retd.) and Director-General of NCC, John O. Asein made this commitment during a courtesy visit of NCC delegates to the NDLEA Headquarters in Abuja on August 2.

The Chief Executives noted that drug trafficking and copyright piracy were inimical to national development. They also expressed concern that both criminal activities adversely affect the youths particularly, thereby destroying the country’s creative resource “who also represents the future of Nigeria”.

Brig.-General Marwa further stressed the linkage between drug abuse and copyright piracy and assured of renewed institutional support and capacity building to boost the enforcement capacity of NCC while both agencies would continue to share intelligence. “We are going to collaborate and work together because the drug scourge requires collaborative efforts. All hands must be on deck, and we are happy to work together with NCC”, he stressed.

Earlier, the Director-General, NCC had commended NDLEA for supporting the Commission’s efforts at fighting piracy, through training of officers, logistic support and information sharing. He agreed that drug traffickers often channel their ill-gotten wealth through copyright piracy to give a semblance of legitimate business. This, according to him, underscored the need for both Agencies to strengthen the partnership against criminal activities for the good of society.

While restating the commitment of the Commission to its mandate, the Director-General used the opportunity to commend the Federal Government for the new Copyright Bill which was recently passed by the National Assembly. He expressed optimism that the Bill, when signed into law, would enhance the Commission’s enforcement capacity and serve as a catalyst for revamping the nation’s creative economy.

The Chairman, NDLEA, used the occasion to commend the Commission on the passage of the Copyright Bill and for the numerous achievements of NCC in bringing sanity to the creative sector. He gave further assurances that NDLEA would join other stakeholders to canvass for early presidential assent to the Bill.

Both Chief Executives agreed to a Memorandum of Understanding to formalize their renewed partnership.

The NDLEA Chairman used the opportunity of the visit to decorate Asein as an Ambassador in the Agency’s War Against Drug Abuse (WADA). In turn, Dr. Asein thanked the Chairman for the honour. He promised to lend his voice to the campaign and solicit the support of stakeholders in the creative sector to also propagate the message that “illicit drugs are bad”.