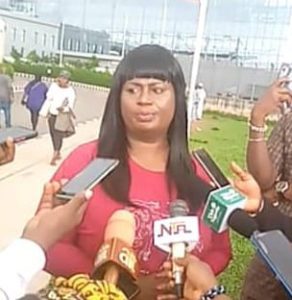 PASTOR Tinuola Babafemi, a Nigerian-Canadian cleric and business woman says all arrangements has been concluded to establish an initiative to feed the poor and help low income earners in Nigeria.

Babafemi, founder and Chief Executive Officer, House of Praise and Prayer Food Bank Initiative, Canada, South Africa and Pakistan, told newsmen, on Wednesday in Lagos, that she had come to provide food for the hungry.

The cleric, who operates a restaurant in Canada, decried that many Nigerians abroad kept complaining, but were not ready to take step to better the lot of the people in the country.

“I love my country. This initiative will be helping to support families in low income or family that are struggling to meet their needs regularly on a daily basis. We will be providing meals for them on regular basis.

“I have been somebody who has been very comfortable in the past and also had experienced hunger. When I came out of hunger, I believe nobody deserves to be hungry.

“It is a passion inside me from what I have experienced and I started this in Canada running a successful food bank and we are still running it.

“We are doing it in South Africa and Pakistan currently. I think it is a good time to come to my father’s land because I know we need this help more than any country now,” she said.

Babafemi said that the initiative, in August, reached out to over 80,000 people in Canada, South Africa and Pakistan and touched so many in September.

According to her, the initiative remains her life long project and will be ongoing to address the problem of hunger among the poor.

She said, “We must address the most crucial need which is hunger. Nobody deserves to be hungry. Many people go to bed without having a meal.”

Babafemi said that the initiative would start in Nigeria from Ibadan because she grew up in the city.

She said that from Ibadan, it would move to Ilesha, Osun, her state of origin, then Delta, state of origin of her husband, before coming to Lagos and other states of the federation.

According to her, the first step is registration of people who are genuinely in need of food to stay alive.

“Many people have said to me that nothing works in Nigeria, but I don’t want to believe that. I don’t believe in negative. We shall do due diligence by getting people’s identity before capturing them,” the founder said.

She said that from registration the initiative would get to know the family size of each of the beneficiaries.

According to her, when people are hungry, it is not always their fault as some people found themselves in hunger because of divorce, loss of job, death of someone in the family and other circumstances.

On the number of the poor targeted in the initiative, she said that the initiative intended to reach out to as many as possible, particularly by providing food for them.

She said as a christian-based organisation, efforts would be made for counseling.

Babafemi said that the initiative was open to any public spirited individual and corporate organisation who might want to partner.

“Nobody can do it all, we need expertise of other people. We need their advice, encouragement and experience. We are open-minded to anybody who will like to work with us.

“Many things will come into this country through this project that I cannot promise now. It may be bringing in experts that will build low cost accommodation for poor people in Nigeria.

“Our organisation has come to give food to those who are in need,” she said.

On source, she said that the initiative was been funded by herself, pending the time people buy into the projects.

Babafemi urged Nigerians in diaspora to extend a helping hands to the poor in the country, adding “many are complaining but are scared to come to Nigeria.” (NAN)