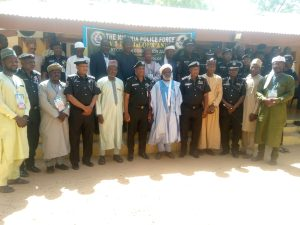 Inaugurating the competition at the command’s headquarters in Birnin Kebbi on Tuesday, the Emir of Gwandu, Alhaji Muhammadu Iliyasu-Bashar, lauded the organisers of the programme for the giant efforts.

The emir, who was represented by the Chief Imam, Central Mosque, Birnin Kebbi, Sheik Muktar Abdullahi, urged security personnel to be Godly in discharging their duties.

Addressing newsmen on the sideline of the ceremony, the Commissioner of Police, Mr Ahmed Magaji-Kontagora, said the competition was meant to bring police personnel closer to God Almighty.

“The main purpose of organising this competition is to instill fear of God Almighty in the minds of security personnel, particularly the police officers, to discharge their duties with the fear of Almighty.

“This competition will aid them to know their creator more, to encourage them to put the teachings of the Holy Book into practice and to ensure adequate security of lives ad property across the state.”

While advising the personnel to be good ambassadors of Islam, Magaji-Kontagora appealed to them to put Qur’anic teaching into their practical lives.

Delivering a lecture entittled: “Importance of Reading the Holy Qur’an and Puting it Into Practice”, Sheik Muhammad Rabi’u-Danjuma, said Qur’an would stand for a man that always recited it before Almighty God on the Day of Judgment, to prevent him/her from entering hell fire.

Rabi’u-Danjuma, who is popularly called Tafawa-Balewa, tasked parents on moral upbringing of their children, assuring that teaching the child Qur’an would earn such parents special respect on the Day of Judgment.

Taking his text from Qur’an and Hadith of the Prophet (PBUH), the Islamic scholar assured that Qur’an remained the best path upon which Muslims should follow to paradise.

“Don’t allow your position, wealth or level of Western education to deprive you from reading the Holy Qur’an everyday.

“Nothing changes the mind of man positively like the Holy Qur’an, therefore, read Qur’an to the best of your ability as it will stand for you before Allah on the Day of Judgment,” he assured.

The Coordinator and Chairman, Mosque Committee of the command, CSP Aminu Saddiq, said the competition was the first of its kind since the creation of the command in 1991.

“The Prophet (SAW) said whoever initiates a good deed and anybody that follows shall have his reward and the reward of those who follow him till the Day of Judgment.

He said same would happen to whoever initiated bad deeds and others following would have the bad deeds as well as that of his followers recorded against him/her till the Day of Judgment.”

NAN reports that the competition featured officers and men from Divisional Police Headquarters across the state. (NAN)