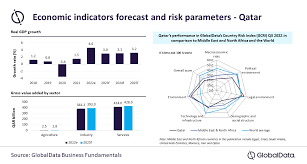 QATAR’S spending of over $200 billion to improve infrastructure, expand the North gas field, host the 2030 Asian games, and initiatives to diversify the economy away from hydrocarbons have strengthened the country’s position as a potential investment destination. Against this backdrop, the Qatari economy is set to grow at an average annual rate of 3.1% over 2023-25, forecasts GlobalData, a leading data and analytics company.

GlobalData’s latest report, “Macroeconomic Outlook Report: Qatar,” reveals that the country witnessed an improvement in its economy and financial reserves due to a strong oil and gas industry in 2022, and this is expected to be sustained in 2023. The Middle East nation recorded substantial surpluses in both the fiscal and current account balances in 2021 and 2022, which are projected to rise further in 2023.

The energy crisis that led European nations to stop relying on Russian gas has also enabled Qatar to consolidate its position as the world’s leading supplier of liquefied natural gas (LNG).

Maheshwari Bandari, Economic Research Analyst at GlobalData, comments: “Several international events scheduled in Qatar during the year 2023, including AFC Asian Cup, Formula 1, Geneva International Motor Show, and Expo 2023 Doha, are expected to keep the economic activity, jobs and domestic demand buoyed despite the global economic slowdown. Qatar’s real GDP growth is projected at 3%, unemployment rate is forecast at a low of 0.1%, and real household consumption expenditure is estimated to rise by 4% in 2023.”

The Russia-Ukraine war has opened commercial and diplomatic opportunities for Qatar to increase energy sales to Western countries amid sanctions on Russia and tensions with other Gulf Arab states. In November 2022, Qatar signed a 15-year deal with Germany to supply up to two million tonnes of gas from 2026.

Qatar is categorized as a low-risk nation and ranks 33rd out of the 153 nations in GlobalData Country Risk Index (GCRI Q3 2022). The country’s risk score is lower in the parameters of political environment, macroeconomic, social, and environmental risk when compared to the average of Middle East and North African nations.

Bandari concludes: “Over the medium term, Qatar’s emphasis on expanding gas fields and initiatives to diversify the economy with ambitious green energy projects including the construction of two significant solar projects that would more than double the country’s current renewable energy output within two years are expected to make it a favorable investment destination for global investors.”