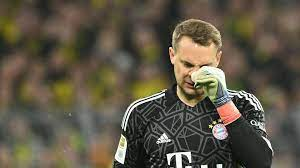 GERMAN goalkeeper Manuel Neuer has been urged by predecessor Toni Schumacher to retire from internationals for the good of his Bayern Munich club career.

Neuer has been the focus of attention in Germany since breaking his leg while skiing following the Qatar World Cup in December.

He is out for the season and has apologised to the club for his decision to ski.

Bayern Munich were forced to buy Yann Sommer from Borussia Mönchengladbach to fill the gap.

“Given the stress and strain, (if I were Neuer) I would quit the national team and concentrate fully on Bayern Munich,” Schumacher, notorious for a horror challenge in the 1982 World Cup semi-final, said on Tuesday.

Neuer, a World Cup winner in 2014, was helpless as Germany crashed out in the group stage in Qatar in December for a second straight edition.

But it is not just a Germany men’s team goalkeeper who is at a crossroads.

Almuth Schult, who lost her starting berth in the Germany’s women’s team to Merle Frohms, is still searching for a club in Europe.

She is not prioritising the national team at present.

However, the goalkeeper is not retiring from internationals and still hopes to be in the squad for the World Cup in Australia and New Zealand in July and August.

“I don’t see a reason to play in Germany again at the moment,” the 31-year-old former Wolfsburg goalkeeper, who has also become a popular TV pundit, said.

“The experience in the US (with Angel City FC) was good for me, but we were simply too far away. The children really missed their grandparents, uncles and aunts and cousins.

“Of course, getting game practice with a club is a prerequisite for playing for the national team.”(NAN)