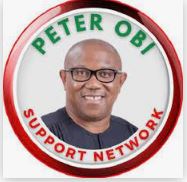 THE Peter Obi Support Network (POSN) has viewed with shock and disappointment a video of Mahdi Shehu resorting to ethnic and religious dog whistle campaign for his preferred candidate.

Shehu is an elder statesman, and so someone of his repute should be careful with his messaging so as not to heat up the polity, a release by Sani Saeed Altukry, spokesman, Peter Obi Support Network, on September 20, said.

According to Shehu, “The statements from Mahdi Shehu are dangerous for a country like Nigeria looking to reap the dividends of democracy. He is resurrecting an old style of divisive politicking that does more harm than good. Every Nigerian including Northern Christians have full rights in every part of the country including the South and they have always been welcomed with full arms open. He needs to be called to order as the statements are unbecoming of an elder statesman.”

Part of the release reads: “Mr Peter Obi is running to be President of Nigeria and not President of Biafra or Igbos or Southern Nigeria. His ambition is to guarantee economic prosperity and security for all Nigerians, irrespective of ethnic, tribal, or religious affiliation.

“Mr Obi put it succinctly while addressing Diasporans in Germany on 27th August 2022, that when Boko haram terrorist attack a place in Nigeria, they do not distinguish between Christians from Muslims or old from young, they wipe out everyone available in their sight. Similarly, when unknown gunmen in the East attack and shoot, they do not care about the identity of their victims. Their bullet kills Muslims or Christians in their sight.

“Mr Obi has also stated that Muslims in the North do not buy bread cheaper than Christians in the south. Poverty, suffering, and Insecurity does not look at religion or tribe, it is universal.  Every Nigerian just as every human being want the simple things of life like comfort and peace of mind.

“We tell Shehu Mahdi and his ilk that the era of their bigotry is ended. He is unexposed, ill-informed, and boiling with vitriol. He does not know that there are so many Northern Christians and Muslims well settled and doing their profitable business in every south-eastern city. Even in the villages.

“In Owerri for instance, there have existed for generations a whole section of the city occupied and dominated by Northern Muslims. Their children attend school with other children, speak flawless Igbo, build houses, and live with absolutely no interference and they thrive well and make their daily living.

“Mahdi is exhibiting that horrible disease of envy that has led many extremists like him to commit atrocities. He should refrain from spreading poisonous nonsense. If a penniless Lebanese or Indian can come into Nigeria and end up a multi- billionaire, why is it so bad, so painful to the Mahdis that a fellow Nigerian and black man can come to Northern Nigeria, make money there, invest the money there, train northern children and leave the place a better place than he found it.

“Mahdi should tell us what he has contributed to improve the lives of fellow northerners both Christian and Moslem; Hausa, Fulani or Tangale.

“People like him have for decades been disinterested in educating and empowering the children of the north out of fear and selfishness. Now he is looking for outsiders to blame.

“In a Peter Obi led administration, there will not be “Cabals” or “Nepotism” or “State Capture by a select few”. It will be all about Character, Competence and Capacity. We call on all well-meaning Nigerians to ignore the statement by Mahdi Shehu and focus on the real message of Peter Obi’s message which is economic prosperity and security for all Nigerians.”