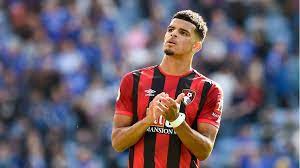 BOURNEMOUTH striker Dominic Solanke has signed a contract extension until the summer of 2026.

Solanke, who was capped by England in 2017, joined the south coast club from Liverpool for a reported 19 million pounds in January 2019, having begun his career with Chelsea.

Bournemouth chief executive Neill Blake told the club website: “Dom was pivotal to our success last year and to secure his future with us is a significant signal of intent from the club.

“He is a highly impressive individual both on and off the pitch and the fact he has chosen to sign this deal speaks volumes for us as a football club.

“We look forward to seeing him operate at the very top level where he belongs.”

Solanke has scored a total of 49 goals in 139 appearances in all competitions during his time at Vitality Stadium.

However, he struck just three times in 42 Premier League outings for the Cherries before relegation under Eddie Howe in 2020.

Following two prolific seasons in the second tier, he is set to make his top-flight return on Saturday when Scott Parker’s side host Aston Villa.(dpa/NAN)