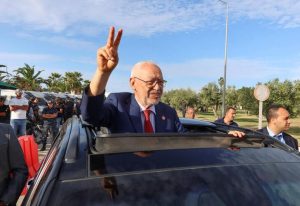 Islamist Ennahda party leader Rached Ghannouchi gestures outside the Judicial Pole of Counter-Terrorism after a Tunisian judge postponed a terrorism hearing against him in Tunis, Tunisia Sept. 21, 2022. REUTERS/Jihed Abidellaoui.

A Tunisian judge has put off a terrorism hearing against the main opposition leader Rached Ghannouchi until November, and said he would not be held in pre-trial detention, his lawyer said.

Police had questioned Ghannouchi for more than 12 hours overnight over accusations that he had helped Tunisians travel to Syria for jihad during the Islamic State crisis last decade.

The 81-year old head of the Islamist Ennahda party, who was also speaker of the dissolved parliament, has denied all the charges and said they are politically motivated.

Another senior Ennahda figure, former Prime Minister Ali Laareyedh, will face a hearing later on Wednesday over the same accusations, which he also denies.

Ghannouchi was summoned to meet the terrorism police on Tuesday and questioned from 5:00 p.m. until 6:00 a.m. on Wednesday, his lawyer Samir Dilou said.

He was also summoned on Monday and waited 12 hours before being told to go home.

Ennahda has accused police of using the investigation to intimidate them because of the party’s opposition to President Kais Saied’s seizure of broad powers and shut down in July 2021 of the elected parliament.

“They were unable to confront a major political opponent in freedom through the ballot box. So they tried to accuse Ennahda of terrorism,” Ghannouchi said as he left the court, waving to supporters from the sunroof of a car.

The police or other authorities have not publicly commented on the case.

Ghannouchi was also investigated earlier this summer regarding accusations of money laundering, which he denied.

President Saied’s critics accuse him of a coup for seizing most powers last year and moving to one-man rule, and dismantling the democracy won in the 2011 revolution that triggered the Arab Spring uprisings.

Saied says his actions were legal and necessary to save Tunisia from years of political paralysis.

In July he passed a new constitution ratifying his expanded powers through a referendum.

Last week, he issued a decree mandating prison terms of five years for people spreading what he called false information online, a move that rights groups and the main journalists’ union have said will undermine free speech. (Reuters/NAN)