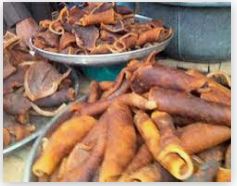 A former Chairman of the Ikeja Branch of the Nigerian Bar Association (NBA), Dr Monday Ubani, on Wednesday appealed to the Federal Government to sustain consumption of animal skin locally called “Ponmo”.

Ubani made the appeal in a statement made available to newsmen in Lagos, following what he described as a threat to ban consumption of the animal skin.

The News Agency of Nigeria (NAN) reports that the Federal Government recently said it was proposing a legislation to ban  consumption of animal skin so as to revive tanneries.

However, Ubani said that “ponmo” was an important element in the daily meals of many Nigerians.

He said that banning its consumption might pose difficulty to those eating it.

According to Ubani, who is the Chairman of NBA Section on Public Interest and Development Law (SPIDEL), the section will seek  court’s protection, if the ban is executed.

He said that ”ponmo” had been reputed to be a poor man’s delicacy and was enjoyed by the average Nigerian.

“The local delicacy called ponmo is the most common delicacy  enjoyed by the average citizen due to its affordability, given that fish, meat and other sources of protein have become very expensive and unaffordable by the common man.

“The truth is that ponmo remains the most constant protein or meat-like substance in the common man’s stew and soups,” he said.

Ubani urged the government to reconsider its stand so as not to ocassion hardship on the common man.

According to him, millions of Nigerians consider ”ponmo” too palatable to be taken off their dining tables, especially when it remains the only affordable substance that has a semblance of meat or fish. (NAN)